Today is March 8, which means we recognize International Women’s Day (IWD) around the world with 2011 being the 100th anniversary.

This year, I want to recognize Wyomia Tyus.

Usain Bolt is famous for being super relaxed and dancing and playing to the crowd BEFORE he races.  In fact, we saw Asafa Powell change his demeanor at the 2009 World Championships in Berlin which helped him relax and win a bronze.  Instead of staying focused, not speaking to anyone, and staring at the ground, these two Jamaicans were high-fiving, chest thumping and playing to the crowd. 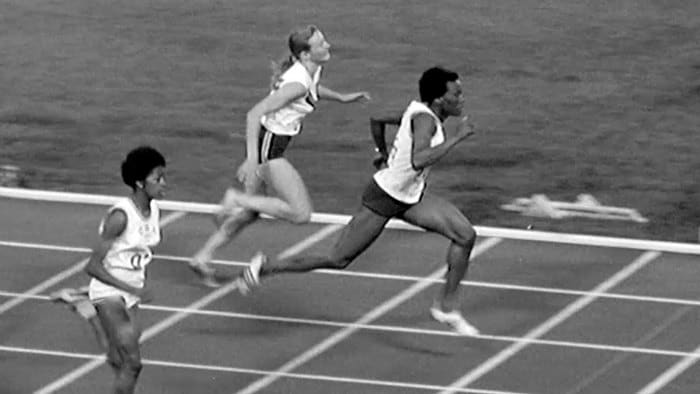 But before Usain Bolt came along, it was actually a WOMAN who started this ritual of the pre-race dance routine.

Long before Carl Lewis became the first man to win back to back 100 meter Olympic titles (and you can contest that as his silver from 1988 was bumped up to Gold following the Ben Johnson disqualification), that feat was accomplished by a women.

Wyomia Tyus won the 100 meter Gold medal in the 1964 Tokyo Olympics as a 19 year old and repeated that victory in the 1968 Mexico Olympics.  She also added the 4×100 meter relay Gold to her collection.

[Tweet “Before Usain Bolt, it was actually a WOMAN who started the ritual of the pre-race dance routine”]

She came from the famed Tennessee State University “Tigerbells” Track and Field program.

What people don’t remember is she did a pre-race dance in 1968.  The hit song at the time was “Tighten Up” by a Houston, Texas based R&B vocal group called Archie Bell & the Drells.  It reached #1 on both the Billboard R&B and pop charts in the spring of 1968.

She did her funky dance before getting into the starting blocks in Mexico City (I know I have that video somewhere).  It helped that the first four rows near the starting line were Americans and had bongo drums and started playing this song.    Ha!  And you thought Gabe Jennings invented this?

There was immense pressure for Wyomia Tyus because she was the defending champion and no one, male or female, had ever won consecutive Golds in the 100 meters.

Here is a tribute to Wyomia Tyus (Video here):