It’s simple… all you have to do is go 6-0 (or 7-0 if you live in fantasy land) on 3 consecutive weekends to win the National Championships.  So Go Hard or Go Home.  It doesn’t matter if you are 27-0 or 18-12, just throw out those damn stats and start with a fresh slate.

When I was in High School, the NCAA Basketball Tournament had 32 teams. That grew to 48 teams by College, and then 64 teams by the time I graduated University.

Since 2001, a 65th rank team entered the Basketball Tournament with a “play-in” game, or known as “Opening Round Game” on the Tuesday preceding the opening weekend.

Starting this year, the tournament expanding to 68 teams and four “play-in” games will be played, now known simply as the "First Four".  The final four at-large teams and final four automatic qualifiers will play in these “first four” games in order to advance into the traditional 64-team bracket.

How long will it be before 128 teams make the Tournament?  There was speculation the NCAA was looking at expanding to 96 teams for 2011.

Who can ever forget the 1985 NCAA Basketball Tournament when 8th ranked Villanova defeated #1 Georgetown with Patrick Ewing?   This is the video I show to my athletes because it just demonstrates anyone (or any team for that matter) can win on any give day. Throw out those damn stats. Let them play hard for 40 minutes, and give 100%.  Same goes for the 4×400m relay.

What was your favorite game?  The 1991 semi finals? 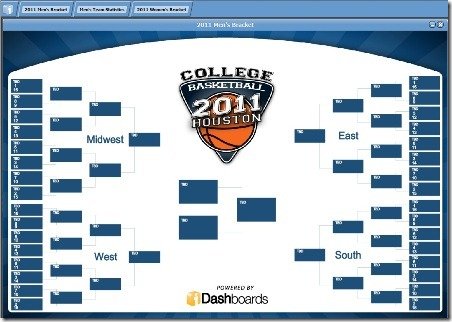 When the tournament begins on Thursday Tuesday, you can get a great analysis of the game details. (Do we really care about the “play-in” "First Four" games?)   No #16 seed has ever defeated a #1 seed since the field was expanded to 64 teams in 1985.  But there’s always a first time. Heh heh…

The tournament is a single-elimination format with no consolation games. If this were the Olympics, you would have the 2 losers of the semi-finals play in a useless “bronze medal game”.  Interesting concept for more TV revenue, no?