Along with the award nomination, this biography was compiled by Urla Hill, M.A., Guest Curator at SJSU.  Her website is Speed City: From Civil Rights to Black Power

Distance coach Ron Davis had held coaching positions in several countries before returning to the U.S. to coach at Maryland-Eastern Shore, New Orleans, Ohio State and South Alabama. Amongst his accomplishments is the founding of the LaGrange Sports Authority in Georgia. He also coached Tanzanian Filbert Bayi to a silver medal in the 3000-meter steeplechase in the 1980 Olympic Games; and Zambian hurdler Samuel Matete to victory in the 400 at the 1991 World Championships, and to a bronze finish at the 1996 Games. Davis has many fond memories of Winter, but none perhaps as heart-warming as Winter’s commitment to recruit people of color.

“Coach Winters was a man of courage recruiting so many African (and Hispanic) Americans for track and field at San José State at a time when the majority of white universities were not giving Blacks the opportunity to get a university education,” said Davis, captain of the Spartans’ 1962 NCAA Cross Country Championship team. “We had three Blacks, and one runner from Brazil on the team that won the national championship.  We were given the opportunity because of our ability, not our color.”

Winter also was known for his hunting ability. According to Lionvale, “He had a Model A Ford (which, according to other athletes, was bound with wire to hold it together) and sometimes he would come to practice from hunting ducks and geese in Milpitas. He’d have on hunting gear and a hat, though sometimes he would just wear it because it was raining.”

Perhaps Lionvale’s fondest memory is that of Winter’s ability to inspire his athletes. “Across the street from his office was a place that sold ice cream,” he said. “He would post on the bulletin board what a guy would have to do to get a milkshake. He paid monthly, and had little chips, or, rather, pieces of paper, that said if you ran that time on a Saturday at a track meet, you could get a shake. Everyone had a floating scale for a milkshake. But on the other end, in order for Ray (Norton) to get one he would have to break a world record.”

As well, if athletes broke a school record, Helen Winter, his wife, would bake that athlete a chocolate cake. “So each week you had a shot at a milk shake and chocolate cake.”

Lionvale – who has held coaching positions at colleges including Central Washington State, Oregon, the University of Kansas, the University of California at Santa Barbara, amongst others, before moving onto the College of the Sequoias – also enjoyed the team’s weekly meetings in which Winter would plot how his team would have to fare in order to win the meet. “Then he would hypnotize the whole track team,” said Lionvale, a sprinter in the mid 1950s. “We would kid the younger athletes, asking, ‘Are you going to let the old man hypnotize you?’ 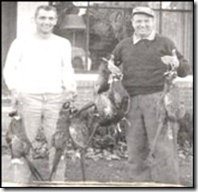 “He would tell us to close our eyes, and imagine our race being successful,” said Lionvale, who was honored as “Coach of the Year” twice during his career. “He would go event by event while we kept our eyes closed, and we’d have a positive imagery of ourselves being successful. Invariably, the whole team would be slumped over, imagining ourselves being a success . . . ”

Rush was with Winter in the hours before he was to be inducted into the USATF Hall of Fame. “I saw him the night before, we had a beer,” Rush said. “At the luncheon (the next day), he sat at our table. Someone called him up to say that that evening, he would have to sit at the head table. He was disappointed because he wanted to sit with us again.”

Winter passed on December 6, 1985, after a game of racquetball. His legacy continues as dozens of his collegiate athletes from the 1950s and ’60s have ventured into the coaching realm at the high school, community college, and collegiate levels.

Winter also has been inducted to the San José Sports Hall of Fame, the USATF Hall of Fame, and the African American/Ethnic Sports Hall of Fame. In ’56, Winter organized the first international coaches’ clinic.  In addition to Relax and Win and So You Want to be a Sprinter, he wrote So You Want To Be A High Jumper, The Jet Sprint Relay Pass, and The Rocket Sprint Start (due to be re-released in 2011). He helped produce a film, Sprinting with Bud Winter, part of the Ryan Films track and field instructional series, in 1967.