How to Improve your 100 meter Start: Quickness vs. Powerful?

You are here: Home / Coaching / How to Improve your 100 meter Start: Quickness vs. Powerful?
8
SHARES
FacebookTwitter

I just completed the first draft for the updated Bud Winter book The Rocket Sprint Start. The original version was from 1964, so I think a new version is overdue! 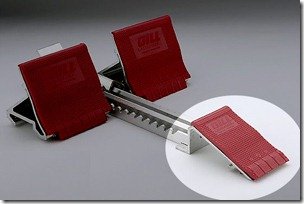 Since this will be a detailed book on starting block styles (i.e. angles) and techniques, I had to add the section on the Moye Starting Blocks because it is relevant.

I think a lot of coaches and athletes don’t know the difference between “quick” and “powerful”.

Last month when I was watching the Marc Magiacotti’s 100 meter videos, he showed an easy drill for showing athletes the difference between “quick” and “powerful” where quick = slow, and powerful = fast.  Another one of those “ah-hah” moments.

You see, you can be quick, but not fast.  You can be fast, but not quick.

The Moye Starting block is named after the invertor Charles Moye from Akron, Ohio in 1989.

The Moye Starting block (or the Moye starting position) concept is simple.  The angles of the blocks are much different than conventional starting blocks. The rear block has a very steep angle, and the front block has a low angle for the heel of your front foot. The front shoe has the spike plate and needles in contact with the synthetic track surface.

With the Moye blocks, the sprinter has a higher hip position than conventional starting blocks which will result in a greater vertical force rather than a horizontal force when leaving the blocks. Thus the sprinter will get out “quicker”, with quicker steps and quicker turnover, but at the expense of horizontal power.

Quicker may not necessarily mean “faster” in terms of relative time.  Remember what Tom Tellez said.  Speed is simply how fast you are covering ground.

When they claim these blocks can “Get You Out Quicker”, they are correct, but you really need to see the whole picture.

So, are these good?

For elite sprinters, I would choose conventional starting blocks as leg strength and power can be maximized to its full potential (i.e. both force vectors) to cover ground as fast as possible.

But for Youth athletes and veteran Masters athletes who lack leg strength and/or power, you should consider a modified starting position even if it means using the Moye blocks, a 3 point start , or even a 2 point crouch start.  If you don’t believe “standing starts” work in sprints, just ask Bill Collins.

Inexperienced youth athletes should just use a 2 point crouch start like the 800 meters, as long as you know which foot goes in front and back.

The U of Alberta Research Project on Moye Starting Blocks 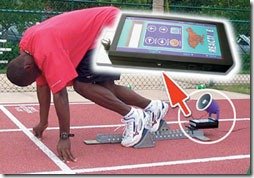 This University of Alberta Research Project study was performed by Dr. Pierre Gervias and Steve LeBlanc. Steve was a PhD provincial candidate at the time at the University of Alberta and is currently the Atlantic Region Head Coach for Athletics Canada. (and doing a great job, by the way!)

The original paper can be found here using ReacTime units.

The purpose of this research project was to examine the biomechanics of a sprint start from Moye blocks as compared to standard starting blocks. Below is a summary of their conclusions.

In fact, only 3 out of 94 recorded trials were deemed to be false starts by the ReacTime units (and subsequently not included in calculations of average RT), and all three of these were during trials on the Moye blocks.

It may be that something in the block configuration makes it result in faster recorded RT – this may have implications for athletes using the Moye block in competition since major competitions typically make use of false start detection equipment, like the ReacTime units used in this study.

Further research will be required to clarify this point.

Note: the Moye device attachment pictured above from Gill Athletics requires any one of the Gill Fusion Starting Blocks below.  The first model (far left) are the same ones used at the USATF Championships.  The other two have have fixed pedals at 60 degree angles.