More and more coaches and rehab specialists are focusing on having a healthy psoas, or specifically, the healthy “iliopsoas” group, which are 3 muscles: psoas major, psoas minor and the iliacus.  For more information on the psoas muscle and how to stretch and massage it, read The Psoas Major Muscle: the Forgotten Hip Flexor.

Normal sprinting and weight training exercises focus on the posterior chain:  primary gluteus, hamstrings and calves.  You can read Vertical Jump and Sprinting: Training the Posterior Chain for more information on this topic.

And finally, I wrote about the hamstring injuries caused from iliopsoas imbalances.

Here is another good article written by Dr. Evan Osar that reiterates the need for a healthy psoas group!

Most coaches involved with training athletes for speed recognize the importance of training the posterior (extensor) chain. Triple extension at the ankle, knee and hip is one of the fundamental components in developing first step, straight ahead and explosive speed. Many coaches incorporate exercises such as the deadlift, the clean and jerk and the squat to name just a few into their athlete’s conditioning routines. Additionally, many trainers have successfully adapted exercises such as hip extensions on the stability ball into the routines of their athletes.

With the recent emphasis on extensor chain in training manuals and routines, it is easy to overlook the importance of training the additional kinetic chains. One of those chains that often requires specific training is the flexor chain. The muscular components of the flexor chain include the psoas major, iliacus, pectineus, rectus femoris, anterior fibers of the adductor magnus and tibialis anterior. The psoas major is of particular interest as it has significant actions on both the spine and hip. This muscle will be expanded upon below. 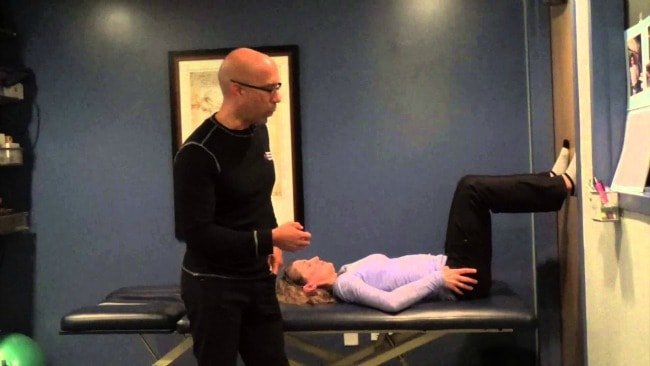 Structure and Function of the Psoas

Structurally, the psoas attaches to the thoracic and lumbar portions of the spine at the levels of T12 and L1-5 respectively and extends inferiorly to insert into the lesser trochanter of the femur. The psoas creates anterior compression of the spine and thereby functions as an important anterior stabilizer of the spine during any weight bearing activity. Acting as a dynamic stabilizer of the hip, the psoas is important in maintaining proper joint integrity of the hip during functional movements. It functions to maintain the lordotic curve in the lumbar spine and assists in creating a neutral alignment of the pelvis (1). In the upright posture, contraction of the psoas contributes to an anterior tilt of the pelvis which some experts suggest is the optimal pelvic position during sprinting (2). As part of the flexor chain, the psoas aids the knee drive phase of the sprint cycle and assists deceleration of the leg at the end of hip extension.

Psoas weakness has dramatic impacts on force production necessary to reach top levels of speed. For example, a weakness in the psoas often leads to altered joint alignment and muscle inhibition of the deep stabilizers of the spine and pelvis. Weakness may also cause the spine to buckle as the hip is flexed. Both of the aforementioned scenarios can lead to decreased force production during hip movements while creating potentially damaging loads to be placed upon the spine.

Strengthening of the psoas can be difficult in the presence of increased tonicity in the tensor fasica latae, rectus femoris and adductors or restriction in the posterior hip capsule. One function of the psoas is to maintain an optimal axis of rotation of the hip joint. In other words, the psoas maintains the alignment of the femoral head in the acetabulum (socket). Therefore, any situation that alters the femoral head position will affect the function of the hip and therefore need to be addressed prior to psoas strengthening. Visualization and imagery techniques can be used to reduce activation of the tensor fascia latae, rectus femoris and adductors. Muscle energy and contract/relax techniques are extremely effective in releasing restrictions in the posterior hip capsule.

Psoas strengthening begins with teaching proper local stabilization activation. The deep fibers of psoas are likely part of the local system and therefore act in feedforward manner (have an anticipatory action to movement). Basic core activation includes isolation of the local system. The local system is vital to the stabilization of the core and is composed of muscles that form a muscular “girdle” around the spine, pelvis and hips. These muscles co-contract prior to motion to provide joint stabilization and provide a stable platform in which to create motion. The local system consists of the diaphragm (DG) which forms the roof, the pelvic floor (PF) which forms the floor, the transverse abdominus (TrA) forming the anterior and lateral walls and the multifidus (MU) which makes up the posterior wall.

On visual inspection, it should appear as if the navel were being pulled straight back towards the spine (white arrow) with no abdominal bulging or bracing which indicates over-activity of the oblique abdominals. To integrate the psoas, imagine a line (or wire) connecting from the spine to the hip socket. Visualize pulling from deep inside and allow the hip to be tractioned gently into the socket as the hip is brought into flexion. Maintain this connection especially during eccentric loading (as the leg is extended). 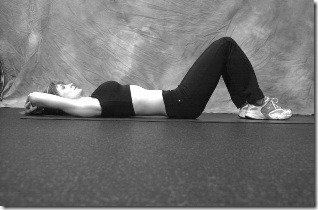 Once activation is successfully achieved, progress to performing stepping lunges and returning to a single leg stance. Be sure to focus on triple flexion (flexion of the hip, knee and dorsiflexion of the ankle). As strength and coordination improves, a cable or resistance band may be attached to the ankle of the leg that is being raised.

As part of the flexor chain, the psoas muscle is an important component in maximizing speed production. With proper integration and sequencing, increases in PMj function can lead to improved core and hip performance and decrease the likelihood of low back and/or hip dysfunction.