Maybe I should rename the title of this post to:

Bill Nieder won the Shot Put silver medal in the 1956 Melbourne Olympics and went on to win the Gold at  the 1960 Rome Olympics.

If you read the book Rome 1960: The Summer Olympics That Stirred the World

, it covers the story of Nieder and Parry O’Brien.  A recommended read.

Here is the partial story from LJWorld.com: (photo source: Pictopia.com) 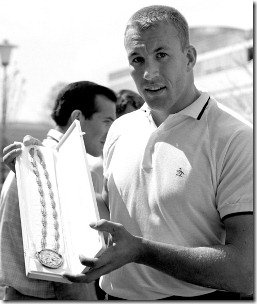 Nieder said he helped to bring down the man, later identified as Rageh Almurisi of Vallejo, Calif., who spread terror on the flight.

“I was one of three guys who threw him down, but I’ve had problems with my hip, so I wasn’t one of the ones holding him down,” Nieder said. “Three guys were holding him down until the flight landed. He was well taken care of. I went back to my seat to sit down and his head was under my seat.”

Nieder, 77, and his wife, Sharon, were returning from a four-month cruise around the world on the “Love Boat” ship on which the television series was based. The Nieders were sitting in first class when Nieder said the man ran down the aisle screaming the words that passengers fluent in Arabic identified as “God is great!” and then began pounding on the cockpit door, at which point he was restrained.

“My wife was scared and thought he might have had a gun or a bomb or something,” Nieder said. “I think she was more shook up after it was all over.”