I’ve always loved the 150m distance as it is a good indicator to extrapolate a 200m and 400m time.  See my previous article on 150 Meter Fly Time to Project your 400 Meters

I am glad he broke the WR as there was Controversy over Tommie Smith’s 19.5 200m Straightaway WR 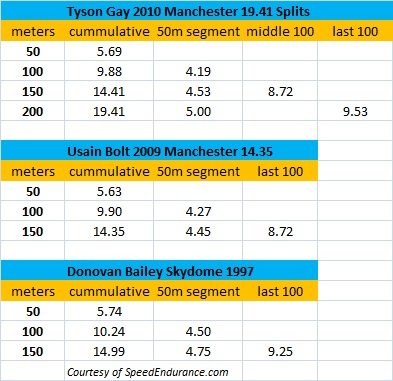 This Sunday, in 2011, we will see Tyson Gay along with UK’s Marlon Devonish and Christian Malcolm attempt to break the 150 meter WR.

Can Tyson Gay break the world record?  A lot will depend on the weather and tail-wind.

If you are curious on how they build the track, read The Making of Manchester.  The race will take place on a specially built four-lane track running down Deansgate in the heart of Manchester.

You can watch Manchester’s Great Day of Sport on Sunday on BBC2 with the Manchester Great CityGames 3.30pm-5pm local time.