As a final recap to this wonderful meet, here are some short stories and videos on this Blog in case you missed it:

Here are some closing remarks to conclude this series.

You have to love Italy… they treat athletes, coaches and media like VIP diplomats.  That is, they had a police escort to get us from the meet hotel to the stadium on time.  The Brits on the Bus were comfortable as often we would be driving on the LEFT side of the road because of the normal traffic!  What do you expect?  It was 5pm rush hour.

And yes, the shot putters on the bus took 2 seats.  YOU tell Christian Cantwell to move over!

Speaking of shot put, up until Dylan Armstrong’s 5th throw that eventually won the competition, the leader, Poland’s Tomasz Majewski (i.e. the 2008 Olympic champion) was the leader and he’s a GLIDER!  For all the youths out there, there’s no pressure to move up to the spin, even though it looks more sexy.  Speed, power and strength rules in the shot put.  And technique, of course. 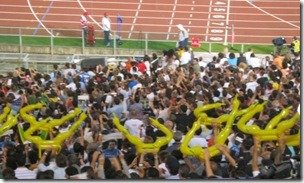 What is bizarre about Puma is you can buy their inflatable Bolt arms from Puma Europe but not Puma USA.  I am not sure about the politics or customs/duty issues but on my next trip to the USA or Canada, I’ll make sure I bring a few as gifts or giveaways.

Which brings up the next question:  How do I explain to Immigration Officers that I have several inflatable objects in my carry on?

What impressed me about South Africa’s LJ van Zyl was he was first to the 1st hurdle.  Speed rules, and his first place time of 47.91 (in May!) demonstrates this.  Of course, there’s more to the 400mH than the fastest to the first hurdle (i.e. hurdle technique, stride rate and rhythm, and of course speed endurance) but he ran the race aggressive from the start and left nothing in the tank past 401 meters.  That’s the way I like to see people run the 400m and 400mH.

No Boom Camera Fiasco this year

Last year’s Boom Camera fiasco was a tough break because your next race at European meets (if you’re lucky to get accepted, that is) and lane position is based on your recent performances.  DNF’s are not good on your resume.  Spectacular times are.  I am glad there was no major fiascoes for the quarter milers year, except having to wait for Bolt to leave the stadium.

And that’s all folks.  Until next year…