By now, everyone is talking about Robby Andrews come-from-behind victory at the 2011 NCAA outdoor Championships (see video below).

At first, you can say he was lucky, or that he always had the faith to win (again, see his post race interview)

When it comes to a Championship race, I don’t care much for splits, or the winning time for that matter.  Without rabbits, the goal is simply winning whether it’s 1:43 or 1:50!  It doesn’t matter if you lead from gun to tape, or do a negative split come-from-behind Dave Wottle at the 1972 Olympics.  Winning is the ultimate goal, and points for the school.

Like the 400m, there is a smart way to run the 800 meters to optimize your energy stores.  You don’t want to run out of gas at 700m, nor do you want a bit left at the finish line either. 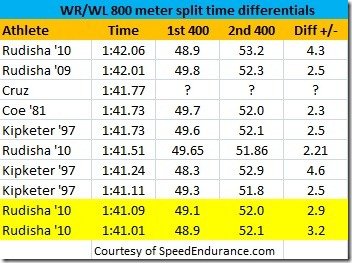 The runner-up of the NCAA 2011 NCAA Championships was UC Irvine’s Charles Jock with splits of 49.85 and 54.90, which is a huge 5 second differential.  (most importantly, it was 8 points for his school)

Virginia’s Robby Andrews first lap was 51.1, with a second lap around 53.4 seconds.  Like sprinting, he is decelerating the least.

So while it may seem Robby ran a lucky race, he really knew what he was doing in terms of pacing.  But most of all, he had faith and confidence in himself.  And that is the most important element of all.