Performance vs Maintenance: When Do You Quit Sprinting?

You are here: Home / Coaching / Performance vs Maintenance: When Do You Quit Sprinting?
4
SHARES
FacebookTwitter

The recent talk about Tyson Gay’s injuries leads me to ask the question:

When should you stop thinking of “performance”, and focus on “maintenance”?

Or perhaps move up in distance?

After Tyson Gay scratched out of the 100 meters semi finals, people suggested he retire, or that he only has “two or three” good races left in his body, or maybe he should have surgery and focus on the London 2012 Games.   (i.e. forget the relay at World Champs, buddy)

To answer the question on Performance vs Maintenance, I think Asafa Powell is a great statistical role model (well, for the first 95 meters that is).  He’s been fairly consistent, runs great races early in the year, and has never scrapped an entire season due to injury.  Also, his results are well documented.

A while back, I wrote about peaking after a certain number of “training years” (read Masters Track is like a Car: It’s Mileage, not Age that Matters), and it may be time to just maintain your peak form, or simply move up in distance.  (read When Athletes Hit a Plateau – Change Distance or Change Training).  Quincy Watts, the 1992 400m Barcelona Olympic Champion was plagued by injuries as a 100 meter sprinter, so he moved up to the 400 meters.  The results speaks for themselves.  (see the video here)

Life is like a roller coaster… you are either going up or going down.  Once you reach that crested peak, there’s only one way to go, and that’s downhill.  Even more so with Masters athletes… nobody gets better with age, unless you are Mr. Barnwell. 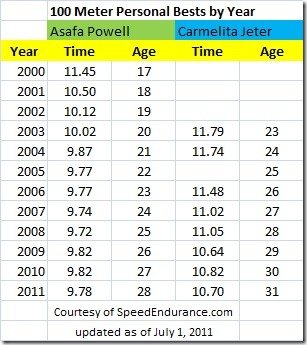 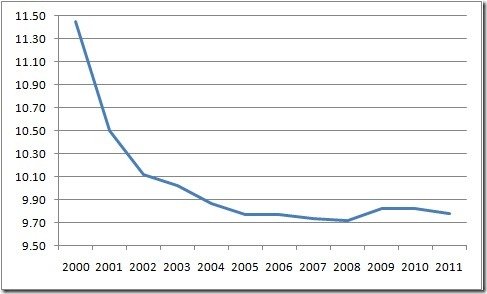 A quick glance shows his last EIGHT years running season bests between 9.70 and 9.90, or the last SEVEN years under 9.82 or less!  Incredible.

By looking at the chart, I feel he still has a chance to run 9.69 given the right wind conditions, altitude, perfect reaction time and race execution.  He must, however, run for the full 100 meters (no kidding!).  I think 9.58 is out of the question for him, but then again, I have been wrong before.  I feel it would be highly suspicious for anyone running between 9.70 and 9.90 for the past 8 years to “suddenly” run 9.58 without some radical change.

Then again, after 8 solid years, I don’t think he should go on a radical weight training or special plyometric training with fantasies of running sub 9.58.  His technique is near perfection.  He has the best arm synchronicity with his legs compared to the rest of the elite sprinters. I think he should focus on not getting injured and simply go on “maintenance mode” and run sub 9.82 for as long as he can.