You are here: Home / Book Reviews / Bud Winter’s So You Want to be a Sprinter Now on Kindle
2
SHARES
FacebookTwitter 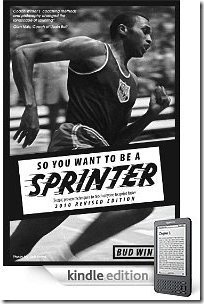 Based on popular demand, Bud Winter’s 2010 edition of So You Want to be a Sprinter is now available on Kindle.

Best of all, it is half priced at $9.99 on Amazon.com US, Amazon.co.uk UK and Amazon.de Germany. If you haven’t bought this book yet, or if your original copy is worn and soiled, now is a good time to pick it up digitally… forever.

You can read his book on the regular Kindle, the Kindle DX, or even an Apple iPad or iPhone.

Here are the 3 stores carrying the Kindle versions:

So You Want to be a Sprinter?

In 1956, Bud Winter of San Jose State University and Speed City fame published a landmark book titled So You Want to be a Sprinter. It was updated in 1973 and became foundation for many coaches back then who would later become world class coaches.

John Stallcup, the primary editor, and I amalgamated the different versions as well as updated some of the terminology and imperial to metric distances. 98% of the original book remains intact.

The Kindle version is the same as the 2010 paper version with a slight modification to the formatting for the Kindle.

What is “So You Want to be a Sprinter”?

So You Want to be a Sprinter covers:

It is a complete concise book with simple cues and uses his classic Champ vs Chump analogies to get the point across to new sprinters.

The paperback book is reasonably priced at $19.95

There is also a “Coaches Edition” spiral bound book.  In the past, many coaches used this book as a field journal and scribbled their own notes in the book.  The “Coaches Edition” book is normally $21.95 and with a sale price $19.95.

Whether you are a High School coach or a Track and Field fan, So You Want to be a Sprinter is definitely a book for your collection.

I certainly can endorse this book!