Several years ago in the days before YouTube, there was a viral video in the running forums of Ato Boldon doing a 60 inch or 1.50m box jump (approximately, video below). The height of the box reaches Ato’s neck or chin. Obviously, people confused this with the vertical jump or vertical leap test, but it is still a good indication of explosiveness.

Then there was Dwain Chambers doing a 64 inch box jump (approximately, video below), and this was jumping onto those flimsy plastic “Aerobic Step” steps from the 1990’s.  Dwain is 5 feet 11 inches or 1.80 meters tall, and you can see in the video the relative height when he stands next to it.  The top step reaches his nose.

As Charlie Francis would say, it’s better to jump 7 feet once, than to do 7 one-foot jumps.  In both cases, they are over 5 feet high.

I am a firm believer in plyometrics, and I will choose plyos over weight training any day, especially with younger athletes.  Tom Tellez, Carl Lewis, Kim Collins, Alan Wells, and Daley Thompson all share the same sentiments.

My personal stance on this is you should try to incorporate BOTH weight training and plyometrics in your training routine.

Thanks to Tomas for sending this picture of Jeremy Wariner doing his usual pre-race routine.  Based on rough calculations, on a standing “tuck jump” (as opposed to Ato Bolden and Dwain Chambers using a running jump), we see JW capable of jumping at least 110cm, maybe over 115cm… that’s over 3 and half feet.  And he’s not even trying.

Disclaimer: when doing box jumps, please consult your coach before attempting jumps higher than 36” or 1 meter. 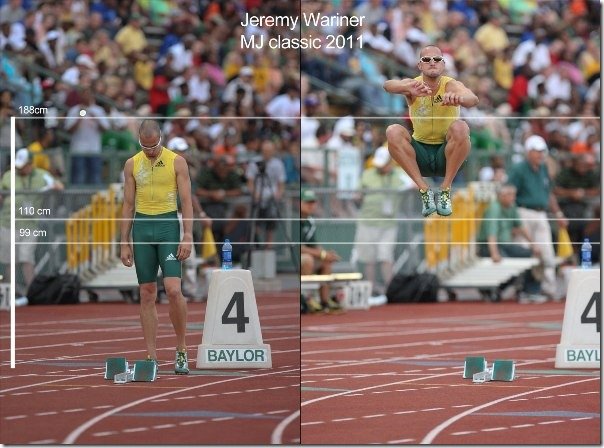