This article is guest blogged by Carl Valle, USATF II

The technical demands of the 110m hurdles are often looked at visually from a mechanics perspective, one that is biased to what the athlete looks like with eyes. Coaches are encouraged to use visual analysis both on the track and when reviewing film. Unfortunately, without the time and distance components, angles are not complete measurements without the context of velocity.

In this article, we will review the Top 5 important measurements of hurdle practice.

What are Key Performance Indicators?

Key Performance Indicators, or KPI for short, are defined measurements that help track the success of a program or business. As technology and sport become more fused, the new measurements and their relationships with success will become more popular with coaches. Due to the past limitations of equipment such as expense and tedious setup, old standby methods became the norm. Unfortunately, the men’s hurdles have not seen much progress since the spectacular performance from Renaldo Nehemiah 20 years ago. My belief is that the reason for the stagnation is the lack of meaningful split data for hurdles other than touchdowns. While touchdowns are accepted measures to evaluate hurdle clearance performance, they don’t tell the complete story behind the event. Since hurdle mechanics repeat ten times during a race, small changes to hurdle clearance can multiply into significant changes in races. Below are the five Key Performance Indicators in sprint hurdles for the 110m.

Some of the above definitions are new because of the recent advancements in technology. New technologies such as video analysis software and automated timing systems make it possible to acquire information that was painstaking or impossible to get before. While other measurements exist such as ground contact time, many of those measures are symptomatic of the aforementioned issues. I am strongly influenced by the notion that take off is a major factor in hurdle performance and I suggest reading Gary Winckler’s hurdling information.

How to use KPI Metrics in Practice 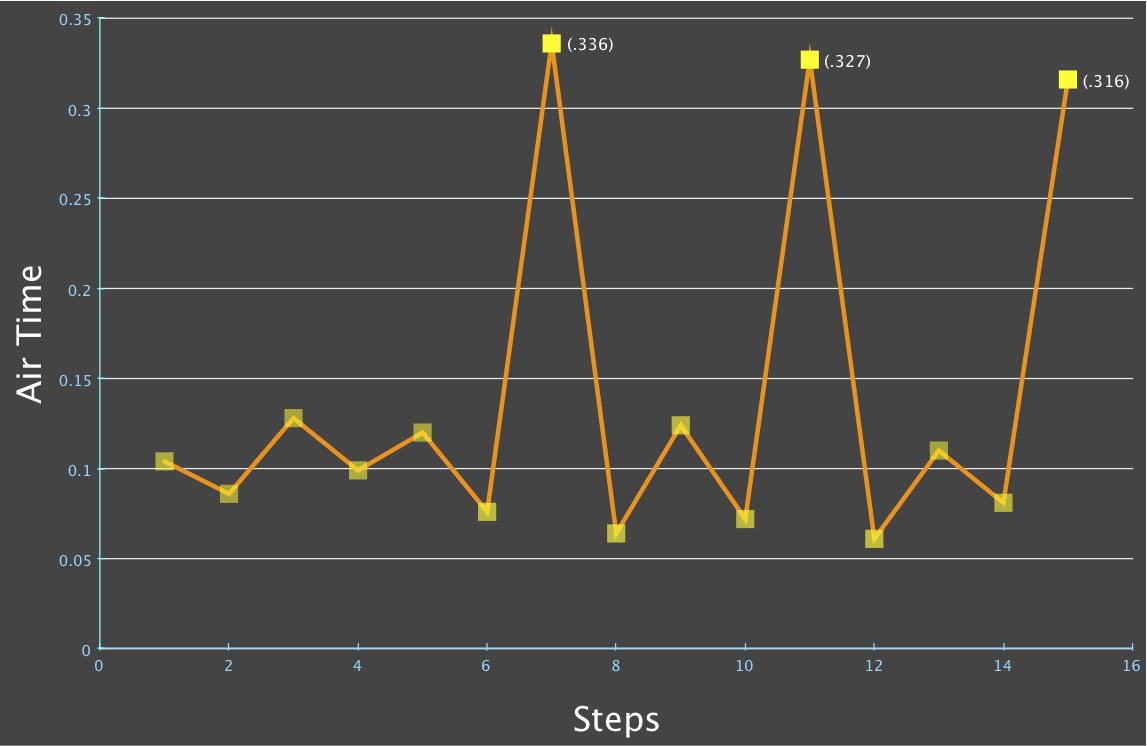 Robles Air Time.  Above is the actual ground Air Times per step during a training session in Barcelona with Dayron Robles. While the steps between the hurdle are vital. a Key Performance Indicator is minimizing the hurdle flight time. As one can see, the flight times drop each successive  hurdle and elite status is .310 or faster for elite 110m hurdlers. The Air Time is a summary of what was done, it is up to the coach to determine what changes in flight path must be needed to optimize performance.

A common challenge is to review hurdle practice times with the complication of hurdle spacing and hurdle height changes with men’s hurdles versus race data. Since the relative hurdle height is much higher compared to women, more work is needed to focus on technique, as the event is further away mechanically from sprinting than the women’s race. Besides the mechanics changes to manage the hurdle, many coaches and athletes use shorter spacing and hurdle heights to create similar and faster rhythms. While the times may be similar to performances in meets, coaches should record the specific hurdle set-up information to create context of the data. When training, coaches should focus on mechanics first and analyze the KPI data later. It is often the case that chasing numbers is counterproductive and should be avoided.

The two most comfortable and timeless feedback scores for coaches and athletes are touchdowns and take off distances. The take off distance to the hurdle and the touchdown splits are universal numbers people feel comfortable with. Unfortunately, touchdown splits are just convenient numbers to reflect on, but don’t share why they occurred. Since this article is focused on performance data and not biomechanics and orthopedic information, the measurements will be focused on viewing the hurdler from the side as opposed to the front.

Flight Distance: Take off distances should be far enough such that the athlete’s Center of Mass (COM) in flight is coming down slightly before the hurdle. Take off distances are far easier to see live, but they can be calibrated based on post training video analysis. The Dartfish program allows coaches to get a good estimate that shows flight path of an athlete’s COM. While it may not be the precise COM, all one needs is the change or displacement of a fixed point, since the COM will change in the air based on the technique of the hurdler with various spinal positions. A better option instead of COM is to use the pelvis as a fixed mark, as it may rotate without much undulation and is visually easy to see and trace.

Hurdle Cycle Split: Every hurdle segment is a repeated cycle of three steps and take off and landing. How one measures the segment of time is important because the reference points will be at different parts of the race, even if the intervals are the same. Touchdowns are based on the landing of the lead leg and splits are based on the difference in time from the previous hurdle. If one times 5m away form the hurdle with electronic timing such as Freelap transmitters, one can get a great indication of how well the athlete is performing live in practice. The hurdle cycle split is the sum of many metrics and in order to reduce the time emphasis on many different aspects of speed development and mechanics must be managed. Splits from the Freelap watch can be exported easily to Excel and then imported into Dartfish for clear analysis. 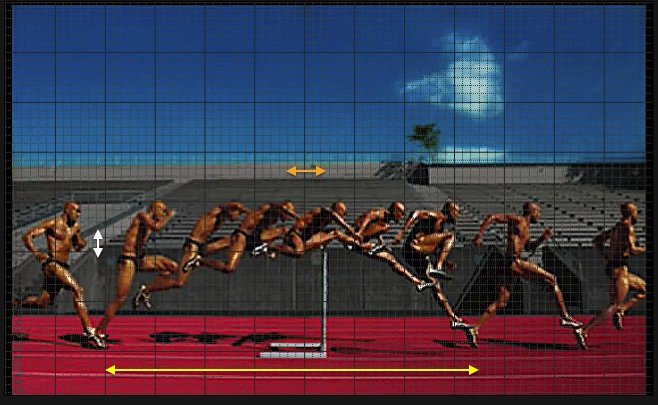 Three Key Performance Indicators exist here with the flight path, and it’s up to the coach and athlete to ensure that the mechanics are audited with time segments.  Flight Distance (yellow line) is the horizontal measurement on length from take off of the trail leg to lead leg. Pelvic Projection (white line) is the rise vertically of the pelvis since the COM changes on body position during flight. Apex Displacement is the distance (orange line) the horizontal distance of the highest point of the flight path to the hurdle. A good combination of all three of the variables usually sets up a great hurdle clearance.

After the meet or training session, Apex Displacement and Air Time are good measures to see how the individual barrier is negotiated. Take off distances can be marked by cut tennis balls or by using known distances of the hurdle if marked or known (especially in competition analysis). Ground contact off the hurdle is not as important unless the lead leg snap down has a delay of some sort.

Unless you have Optojump or similar timing setup, Air Time must be done via video analysis after training. Dartfish with HD video get good numbers of toe off and touchdown duration using the chronometer. Subtracting the Air Time from the Hurdle Cycle Split allows for some crude analysis of what is going on with the running on the ground. If the ground segment is too long but the Air Time is satisfactory, the COM projection was likely to be too high, resulting in too much ground contact time in the steps after clearance and a decrease of speed.

If the Flight Distance is of adequate length, the taller athlete should shuffle easily while the shorter athlete will need to do more work off and into the next hurdle. While athletes can hit hurdles, how they hit them will factor into speed off the hurdle as well as possible balancing and injury risks. Keeping the Apex Displacement high, the athlete will clear the hurdle with minimal spacing and maximum speed running off the hurdle.

A combination of all of the measurements will likely create a great hurdle practice and performance. After recording the time phases and reviewing the relationships between them, drilling down to the actual limb and torso angular actions can be done with Dartfish. Measuring angles and reviewing the sequence of the opposing arms and legs and posture during both sprinting and hurdle clearance can create insight, especially if compared to other athletes and best performances of the athlete himself.

In summary, hurdling technique is about combining the necessary mechanics to safely position the athlete into running in and out of a 42 inch barrier ten times. In order to improve performances, coaches must understand that the purpose of technique is to decrease all aspects of hurdling time, including the time in the air and on the ground. Coaches should provide practices and training elements that support further and further reductions in ground contact and time spent in the air by providing exposure to methods that encourage efficiency and power.

Carl Valle is a USATF II Coach and writes for EliteTrack.com