My Ethical Cheating segment on ESPN 1280AM / Living the Run

You are here: Home / 400 meters / My Ethical Cheating segment on ESPN 1280AM / Living the Run
5
SHARES
FacebookTwitter

Below is the audio and video from my radio appearance on ESPN (The Ticket) 1280AM yesterday.  Many thanks to Ryan Foran of LivingtheRun.com for having me on the show Wednesday.  The co-host is decathlete Paul Terek, a 2004 Olympian and on the USA World Championship team in ’03, ’05, ’07.

Maybe I should title this post “Ergogenic Aids” and not “Ethical Cheating”?

The big question is:

Is it ethical cheating since it’s not on the IAAF banned list of substances? 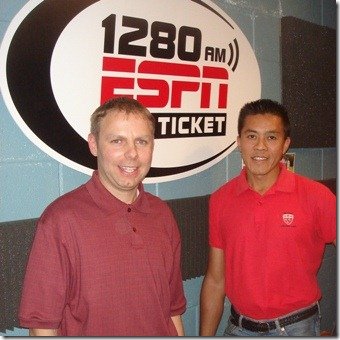 Is caffeine, which occurs in natural foods, an ergogenic aid?   It is actually illegal in high doses in the NCAA.

How about phenylalanines such as Red Bull, Vitalyze, or 5 Hour Energy shots which contain Taurine and/or Tyrosine for better focus and delayed fatigue?

How about baking soda and beta alanine to buffer lactic acid and therefore run longer and stronger in the 400 meters?

How about intermittent hypoxic training (IHT) methods to increase natural EPO (such as altitude tents, chambers, and masks)?

Or even Viagra?   Which supposedly has the same effect as nitric oxides which opens up the blood vessels?

Anyways, it was fun to be on the radio show.  Here is the video on YouTube.  For my segment, Fast Forward to 14:40 which is after the 1st commercial break.

By the way, we also discuss NBC’s coverage of track and field, and you’ll definitely hear Paul’s point of view!