3 years ago, I wrote about comparing 100 meter Freestyle in swimming and 400 meter Sprinting and running.  So when I read and research swimming articles, it’s not because I am in love with Dara Torres.  It’s because any swimming sprint (50m and 100m) resembles the 200 and 400m in Athletics respectively.

That being said, there was a great article in September’s Daily Telegraph from James Magnussen’s coach Brant Best, interviewed by Mike Hurst.

Even swimmers debate about the long-to-short, short-to-long or concurrent training methods!

It’s a great read as they discuss training methods, technology, and relevance to 400 meter running.  Even Australia’s Darren Clark gets a mention!

Below is a partial read, go to The Daily Telegraph for the full article 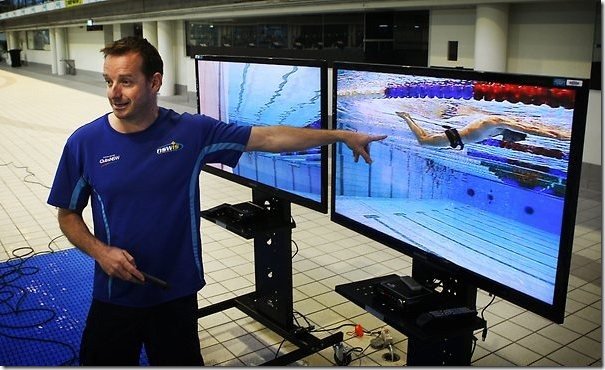 MH: It’s a concept requiring an understanding of speed endurance as endurance at race speed, or better. But you’ve got to have race speed before you can work on your endurance.

MH: It’s not the chicken and the egg scenario anymore. That issue has been resolved.

BB: Yeah. Find the race speed and then load it. Load the shit out of it.

BB: Yep. It sounds like there’s a lot of similarities between what your guys do and what we do in the pool, besides the load runners have to bear which is obviously a completely different issue.

MH: Runners have impact and gravity.

BB: And we are floating, which is a completely different issue.

MH: Brilliant. Can you see a ceiling on the 100 Freestyle. Can someone go sub-47?

BB: It’s definitely possible. If we’re talking about James, it’s just about how well we can get those processes going. It’s about going out quick easy and coming home fast. The suit record is 46.9. The suit rewards excess speed so the guy who holds the record was able to go out like a maniac and he was able to hang on because the suits stabilizes them through the core and invites extra speed. At the moment, the harder you go early the more you die. With the suits the harder you go early it rewards you due to the corset nature of the suit and how it traps the air and holds you together. Without the suit, you can lose your core and you just can’t produce force. So 46.9 would be nice but it’s a suit record. About 18 months ago they were saying it would be 20 years before we can reach these suit times. He’s within a half a second of it now.

BB: No. Oh, there are sit-ups of sorts that we do in the gym but they are modified a little more specifically to bear load. We’ll do some stuff with a medicine-ball above the head. I’ve got Michael Hetherington down in the NSWIS gym who is just brilliant coming up with new things and I’ve got Dave the physio. If the exercise hasn’t got a purpose we don’t do it. Sit-ups develop the wrong set of abs for me. I think we need to develop the abs a little deeper and abs that twist us rather than abs that hold us. We do a lot of twisting, between the shoulders and the hips. The torque we develop – we call it a coil – between the shoulders and the hips develops that chain of power. We can’t do straight sit-ups because that will sit us forward and we can’t be sitting forward like that in the water because bananas don’t swim quick.

MH: I would be really chuffed to think any of the ideas I put together for the Australian 400m record-breaking track sprinters – Darren Clark and Maree Holland – a quarter of a century ago has relevance to you today.

BB: Absolutely they have. To be able to sit around and have a chat about those ideas and what you were doing with them and the different interpretations of how you were using them (the ideas) and comparing that with how I have been using them is part of the value of NSWIS where people can walk in and say what are you doing today? And, how did you do this?

To talk to someone who’s doing the same thing. Coaching is an island. You’re there by yourself and you’re so busy managing it you don’t see outside as much as you should. So to be able to reflect with someone, even outside swimming, and say well this is what it does to my athletes, this is how they feel, just reinforces.

Like, we were doing some of it but to go and have the confidence that we’re on track and here’s some other ideas around it as well, mate no doubt. And to talk about your rest cycles and how you put it in, how much rest you put in between sets . it just ticks the brain over. There’s no doubt conversations like that is gold to me. So yeah, bring it on, let’s talk more. "

See also  What is the World Record for the Plank?