I love determining 10 meter splits to calculate maximum velocity and the amount of degradation over the final parts of the race.

With the popularity of Garmin watches for distance runners, it’s no wonder we are now seeing this technology for speed events, and not just another interactive computer game such as the Wii, XBOX 360 or PlayStation.

Several years ago, we tested the Myotest device for testing speeds in the weight room (i.e. speed strength) as well as testing for vertical jump.  All I can say the results were a disaster based on real results.  A great concept, but a few years too early.  (Any Apple Newton users out there?)

One reason why they are so inaccurate is because they use accelerometers or gyros.  For a pedestrian using it as a pedometer, it may be fine with a fixed stride rate and (very, very slow) stride frequency.  When you are testing for 5 strides per second up to a maximum of 12 meters per second (or near 30 miles per hour), things get complicated.  And inaccurate.

I remember an Al Vermeil seminar a few years back, and he had some video analysis on Tommie Frazier touchdown run, and he concluded the best way to test for maximum velocity is in a straight line.   No cuts, no stop and go.

The adidas miCoach Speed_Cell for Soccer 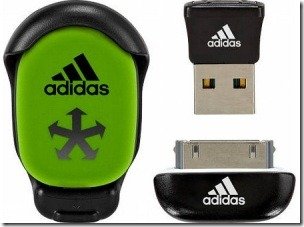 The first sport to utilize the adidas miCoach Speed_Cell is Soccer (Football & Calcio for the rest of the world) and it will only be available for the adizero F50.  Basketball, football and tennis will be available in 2012.  There is no release date for the running module.

You probably saw the video on YouTube where Asafa Powell or Christophe Lemaitre were tested with sensors attached throughout their body.  Now, with the miCoach Speed_Cell, amateur athletes can test performance tracking and make use of analysis technology.  You simply insert the device in the cavity in the outsole of the adizero F50. 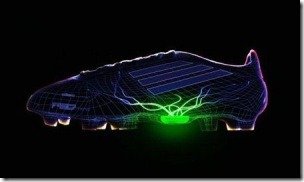 Personal player stats including average speed, maximum speed, number of sprints, distance at high intensity levels, steps and stride during play.  The on-board memory stores seven hours of an athlete’s metrics and wirelessly transmits the data to their smartphone, tablet, PC or Mac.

The miCoach Speed_Cell will be available on December 1 for $69.99 at adidas Sport Performance stores, soccer and running specialty stores and www.shopadidas.com.