Are We Getting Faster? World Championship Performance Trends

You are here: Home / Coaching / Are We Getting Faster? World Championship Performance Trends
4
SHARES
FacebookTwitter

Daegu 2011 is now a distant memory, but there was one interesting souvenir, and that is the IAAF Stats Handbook for Daegu 2011.

What was interesting was the section on performance trends.

As far as the sport as a whole goes, I usually “ignore” the winning time as it could be a freak win, or unusual weather conditions, but what is important is the other athletes in the field and how they rank.  After all, this is how they base qualifying standards for the next championships. 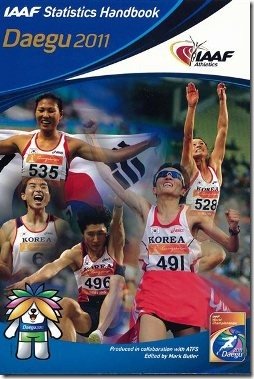 For example, what was the slowest time in the Final, assuming they don’t pull a Derek Redmond in 1992?

What was the fastest time in a semi-final WITHOUT making the finals?  (i.e. a DNQ or Did Not Qualify)

Or fastest time in quarter-finals WITHOUT making the semi-finals?

This is valuable information as you may have a top 32 ranked athlete (or top 100), and wonder how far he or she will go at the Championships.

Let’s look at some sample times.

In 2009, 10.04 is the fastest loser in the semi-final that didn’t advance to the finals!  And you wonder why the semi-finals are more nerve racking to watch, at least for the coaches!

The message?  For most of you in the early rounds, it’s go hard or go home.

Longevity in the sport is rare, and there is a section that displays the ranking of most WC appearances with a minimum of 5.  Geez, I’ll be lucky just to get there once as an athlete.

Only 3 men have made it NINE times, and 2 women made it TEN times!

I am proud that my fellow Canadian racewalker Tim Berrett has attended the Championships NINE times along with another racewalker. (from 1991 to 2007)

Can you guess the third person?  (answer shown below the charts) 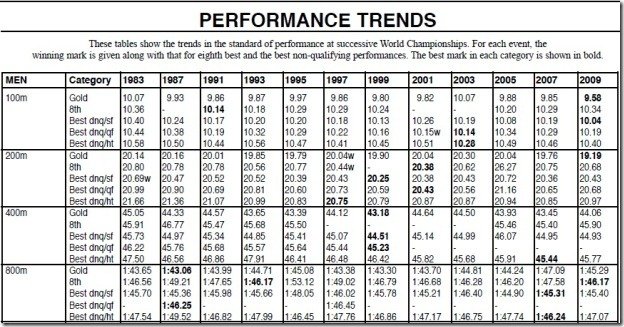