Once again, I want to thank @TrackNation for pointing out some useful references.

Below is a chart I extracted from the USATF 2008 Men’s 400m Olympic Trials Finals.

There are several components you can learn from these results, both in race strategy as well as workout suggestions and guidleines. 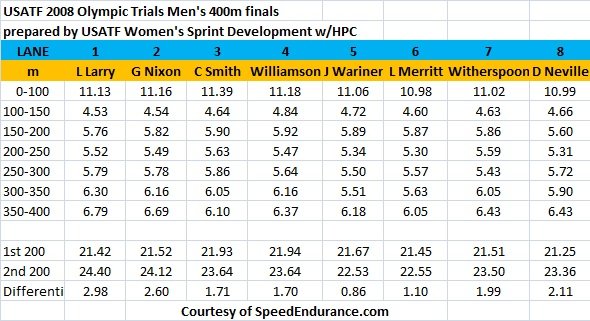 The first glaring error of these splits is the obvious error on the 4th 50 meter segment, that is, from 150-200m.  If you look at the numbers, it appears they slow down dramatically, then speed up from 200-250m.  I doubt that very much.  I’ve long stated that the 400m is to reach top speed around 40-60 meters, then it’s one long deceleration zone.

For these splits, they probably used the wrong marker.. the 200m split is the start line for the 200 meters.

You can see the 400 meter splits from 2009 Berlin World Championships here or even here with differentials anywhere between 0.16 to 2.85!

Sample Workouts Based on Splits

From the 200m splits, there are several workouts you can do.

By the way, you would never see this type of workout in a short to long (S-L) program.  Medium intensity workouts are eliminated from the S-L program.

But the secret to running intervals is, of course, the recovery!

So there’s a lot of creativity when it comes to “repeat 200s” which I’ve written several articles on this Blog.

Another workout as you get closer to peak season is only 2 x 200m at race pace (i.e. the 1st 200m speed, about 21 seconds).  I would recommend full recovery to ensure a quality speed workout.  No use over straining and getting injured.

Did you get queasy when I mentioned “split 400”?

The 2 x 300m or 2 x 325m workout is a classic special endurance workout, but if you only have an indoor 50m stretch like I had back in Vancouver, you can try the Anaerobic Speed Reserve workout by running as many 50 meter segments within the 100-300m pace range.   You simply run back and forth 50 meter segments without “resting”.  (well, you have to slow down safely, stop, breathe, turn around, walk to the start line, then go again… so technically there is a rest).  Of course, a Freelap timing system will work wonders here, especially if you are training alone.

Outdoors, we would do 3 x 100m with 45 seconds rest.  This workout is the shorter version.

The benefit of this workout is you don’t have to deal with the sharp turns of the indoor tracks at high speeds.  Plus the warmer indoor facility may be better than cold, wind and snow!  Trust me!

For Jeremy Wariners’ example, he would do the 50m repeats between 4.72 and 5.51 and stop the workout when time and form deteriorate.  If he clocks slower than 5.51 on the nth repeat, stop the workout.  No use trashing the legs which would take several days to recover (unless you’re “supplementing”,  and that’s a whole other story)