Why Donuts are Bad for You

You are here: Home / Life & Culture / Why Donuts are Bad for You
52
SHARES
FacebookTwitter

In Italy and other parts of the world, Carnevale (also known as Mardi Gras) is celebrated 40 days before Easter, which is February 22, 2012 this year.

One of the popular treats is the bombe fritte or ciambelle fritte also known as the donut or doughnut.

As a former member of Canada’s National Police Force, I have to admit I love donuts. Yes, it’s a stereotype.

Why do we love donuts? 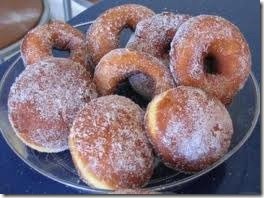 I wrote about Why French Fries are bad for you back in 2008, so it’s time for another injection of my sarcasm, yet reality.

So here are 3 reasons why donuts are bad for you.

The health food world has insisted whole wheat is better than white flour for two reasons.

One is fiber, which helps in normal daily bowel movements.  I read a study a while back where British seamen would only defecate once every 3 or 4 days due to the lack of fiber in their diet while on board a ship or submarine.   This is contrast to an African population who eats an extremely raw high fiber diet and could go more than once a day.  You’ll have to watch Raw by Eddie Murphy where he imitates Richard Pryor on this topic.

The other reason is nutrients.  You’ve been told white flour has it’s nutrients stripped compared to whole wheat flour.

In Italy, white flour is the obsession for both pastas and desserts.  Good luck trying to find whole wheat bread or whole wheat pasta here.

There is another “camp of practitioners” out there that are advocating a gluten free diet.

On the drastic end of the broad spectrum for gluten intolerance, we have Celiac disease, which is an autoimmune disorder that is caused by an intolerance to gluten.  There are lesser toxic effect of cereal grains, which I‘ll cover in later posts.

Gluten is a protein that is found in cereal grains, and it gradually damages the intestines of people with celiac disease, preventing the absorption of vitamins and minerals. Some of the possible related health problems is skin problems and overall fatigue.

Needless to say, sales of gluten-free products have increased every year!

There are good fats and bad fats.  And then there are the terrible trans fats.  Just ask anyone in the “anti-trans fats camp”.

With the population reducing the amount of animal fat, such as butter and lard, industrial seed oils such as corn and sunflower oil consumption has increased every year.  What bugs me is the misleading advertising claiming they are “heart healthy” because several decades ago they believed animal fats were the cause of heart disease.

A recent study showed that a diet with an omega-6:3 ratio of 28:1 caused obesity that progressively increased over four generations in mice.  So, eating too much Omega-6 makes you fat and obese AND predisposes future generations eating the same diet!  If your parents are fat, you’ll be fat too (or fatter!).  See my Why am I Fat article.

But WAIT you say! I am not a lab rat!

Unfortunately, the standard American diet contains an omega-6:3 ratio that is very similar to what the mice in the study above were fed!  (i.e. 28 to 1 ratio).  Check out Worst Club Sandwich in America.

I think we eat too much “bad fats” (both animal fats and seed oils) especially when you eat out at restaurants or buy packaged foods.   That’s why I’ve advocated supplementing with Omega-3 to keep the omega-6:3 ratio in balance.  It may not be enough, but just enough to keep the body in balance.

Then again, when you workout 10-20 hours a week, losing weight and staying slim is the least of your problems.

I couldn’t end this article without mentioning the anti-HFCS camp, which essentially puts HFCS next to Satan.

I think the effects of High Fructose Corn Syrup has been well documented, so I don’t need to repeat them.

However, just to clarify, I am not anti-fructose.

In fact, I have a rule in my house of unlimited fruit.  There’s only so many apples or oranges you can eat before you get bored (unlike candy or chocolate).

Remember Dr. Robert Lustig, the professor in Pediatrics at the University of California at San Francisco?  That name may sound familiar as he was featured on a near-viral video called Sugar: The Bitter Truth from July 2009.

I met Dr. Lustig in person, and you can read that in Sugar: The Bitter Truth Revisited with Dr. Robert Lustig

In the podcast, Dr. Lustig says he’s not against Fructose in whole fruits. He’s only against it as an additive, such as high fructose corn syrup or white sugar, because when fruit is frozen, the fiber is lost when you defrost it.

And of course there are vitamins and minerals associated with fresh fruit.

So there you have it.

White flour, bad fat, and refined sugar will definitely not help your chances to win a medal in London 2012.

But if you are out partying in Carnevale, having one won’t kill you.