The Indoor 60 meters: Where are the Fast Times?

You are here: Home / Coaching / The Indoor 60 meters: Where are the Fast Times?
24
SHARES
FacebookTwitter

Asafa Powell’s 5.64 victory yesterday in the indoor 50 meters was one-tenth of a second slower than his best 50m split of 5.54 seconds outdoors.

This made me ponder… when will the indoor 50 and 60 meter world record be broken?

And why are the indoor times slower than the outdoor splits?  Even with the lean for the tape?

Take a look at the chart below and it’s clear Maurice Green ran close to his potential indoors, which explains why he still has both indoor world records 14 years later.  Bruny Surin’s times are slightly faster for the outdoor equivalents, but nowhere near Usain’s Bolt’s 5.47 and 6.29 split times.

Where are the others?

Now take a look at the 2 charts below.

In fact, there are only a handful of performances from the last 10 years that make the top sub 6.50 list , making Dwain Chambers 6.42 2009 performance a refreshing race to watch.

I am glad Mo has the WR, because when Andre Cason held the WR, we all thought shorter vertically challenged athletes were better at acceleration. Look at Bolt’s 5.47 and 6.29 today and I rest my case.

So if we are getting faster, why aren’t we seeing faster 50 and 60 meter times?

There are several reasons for this.

The Real Reason Why

But wait, I said there were 6 reasons?

#6 – It’s because they are afraid of crashing into the wall.  Psychologically they are slowing down.

[Tweet “The Indoor 60 meters: Where are the Fast Times?”]

But what does impress me is are the non-sprinters in that list, like Long Jumper Dwight Phillips and 110m Hurdler Mark McKoy. 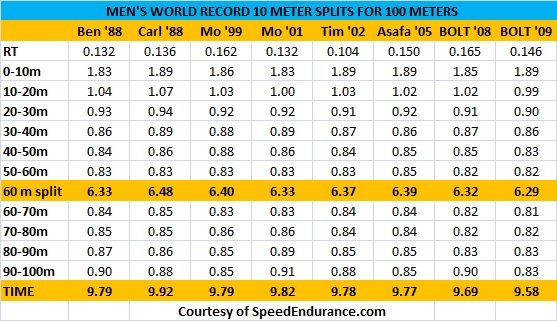 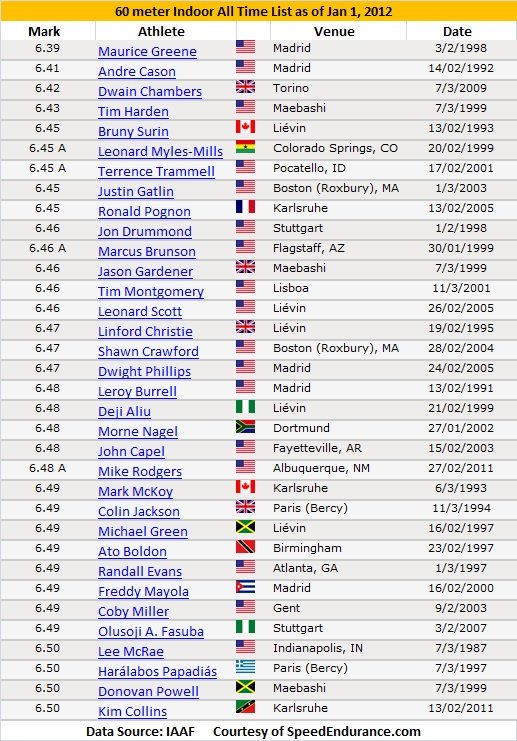