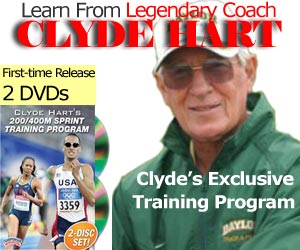 I had the pleasure of speaking with LaShawn Merrit, the 400 meter 2008 Olympic and 2009 Word Championship Gold medalist.

We used Skype, and there were few hiccups with the audio and video.  If there is a demand, we can chat again in a few months and check in on where he’s at for his London 2012 preparations.  Or the USATF Olympic Trials… remember, no “bye” here!