Before I summarize the main points (you can read the original research and Bret’s critique on your own), I want to emphasize 2 points.

One is nothing beats 8 years of consistent, injury-free training with a well structured annual plan which includes proper biomechanical analysis and some form of strength training.

Second, you will from time to time get freaks who have won the “genetic lottery of life” (to quote Sebastian Coe).  Some may play football, some may run track, and some may be an unknown shepherd in Argentina.

I love reading research papers, and I like to understand what athletes are doing (both biomechanically and physiology, and maybe pharmacology) to get them better year in and year out.  But when you get an athlete like Usain Bolt or Christophe Lemaitre who throws your study off the charts, you have to ask (1) what are they doing right and (2) do they have a genetic disposition for that sport?

Here is a chart of Asafa Powell and Carmelita Jeter’s Personal Best by Year from this article, which demonstrates both genetic ability, consistent training, and great coaching.  Imagine turning down Asafa Powell at Age 18 when he “only” ran 10.50?  It’s like Decca records rejecting the Beatles! 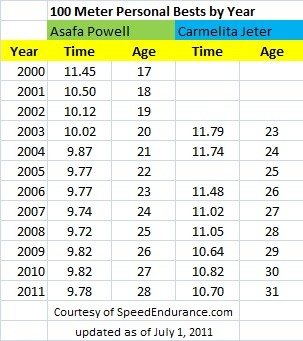 The researchers examined 13 subjects. Nine of them were P.E. students who had been exercising regularly (including sprinting) over the past six months but were not sprint specialists. Three of them were National level sprinters in France. And one was Christophe Lemaitre.

These are excellent questions to ponder for future blog posts, so stay tuned!

To quote Gerard Mach, if at the end of 4 years of coaching (assuming a large group of athletes) you don’t have a handful of male athletes running 10.50 for the 100 meter sprint, something is wrong with the coach, training program, or both!