Other Uses of the Globus SpeedCoach EMS

You are here: Home / Coaching / Other Uses of the Globus SpeedCoach EMS
4
SHARES
FacebookTwitter 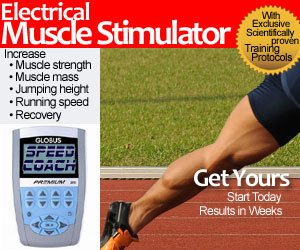 Part 3 is How to Use Electrical Muscle Stimulation (EMS) with Training with uncut, unedited “reality TV” videos.

One of my coaching curiosities outside of Track and Field (Athletics) involve training, nutritional and recovery methods in other countries outside USA & Canada.  As well, I am also fascinated by other speed, power and strength events.

Some of the readers on this Blog may know James Smith of Power Development, Inc., also nicknamed “The Thinker” in numerous sports performance forums.

James is a student of Soviet and Eastern Bloc training methodologies and is engaged in the constant pursuit to further his own physical conditioning and coaching abilities (like myself and numerous other open minded coaches).   Thus the use of EMS is familiar territory with that training background.

With a lot of northern hemisphere countries in warm weather training camps like Florida and California, James sent me a short blurb (with photos) on the use of the Globus SpeedCoach EMS and UK Athletics.

Lloyd Cowan, the Senior National T&F coach of the United Kingdom, was generous enough to allow me to provide technical/physical/recovery-regeneration support to a contingent of his sprinters/hurdlers during their warm weather training the month of April in Orange County CA.

The bulk of my recovery/regeneration support was manifested via massage/soft tissue work and use of the Globus SpeedCoach. I had wanted to utilize the device for developmental purposes as they were starting their SPP training here in California; however, the logistical aspect of their training schedule made it very difficult to provide this type of adjunct work.

Thus, the use of the Speed Coach was limited to it’s warm up and active recovery protocols.

Many of the athletes (whose names will not be mentioned due to liability reasons) became very fond of the device and requested its use on a regular bases both before training, during training (in between repetitions of alactic speed as well as special endurance runs in which the rest intervals were substantial), as well as a warm up for deeper massage work that I performed in the afternoons of low intensity or off days.

The Globus EMS units have been a staple in the training and recovery/regeneration of my athletes.

Here are a couple of the female sprinters are pictured using the Globus SpeedCoach before and during a track session. 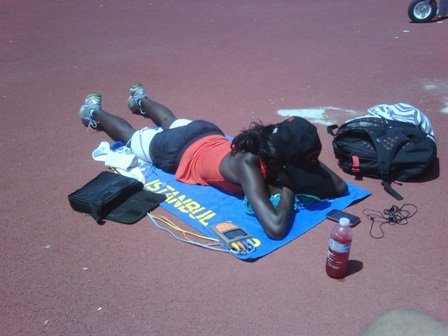 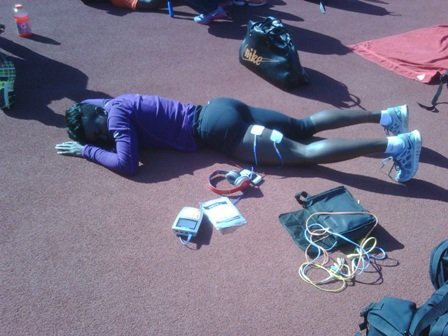