How to Settle the Allyson Felix, Jeneba Tarmoh Tie-Breaker

You are here: Home / Coaching / How to Settle the Allyson Felix, Jeneba Tarmoh Tie-Breaker
3
SHARES
FacebookTwitter

Here is how I would settle the Allyson Felix, Jeneba Tarmoh 100 meter Photo Finish.

Back in 2004, I proposed a rule on how to settle a tie-breaker on the Track.

That is, the athlete with the fastest Semi-Final time is declared the winner.

In the high jump and pole vault, you use the count back rule of missed attempts to break a tie.  If it is still a tie, then a jump-off is required.  Vivid memories of the 1972 Olympic women’s high jump come to mind.

In the long and triple jump, in the event of a tie, the 2nd best jump is used to determine the tie-breaker.  Believe it or not, this happened to ME several decades ago, but it was to determine a 2nd and 3rd position in a low key meet.   But these events happen!

And then there was Athens 2004, and I am referring to the Shot Put event.

USA’s Adam Nelson opened the shot put with 21.16m (69-5¼) in round one, which would be his best throw, and only legal throw, as he followed with five consecutive fouls!  Ukraine’s Yuriy Bilonoh had 21.15m (69-4¾) after round 1.  You knew it was going to be a great competition.

In the final round Nelson had a “controversial” foul of about 21.30m… no one knows for sure, but he definitely would have won the event.

But Bilonoh threw 21.16m (69-5¼) in the final round to tie with Nelson, but his next best mark was better than Nelson’s, who had no next best mark!

The morale of the story for the throws and horizontal jumps:  Always have a second legal performance.

Well, shockingly, Jeneba Tarmoh would be the winner if my rules were in place before the meet (11.10 vs 11.23).  In fact, she was the fastest loser of the 3 semi-finals.  Obviously Allyson Felix eased up winning her semi-final, but nobody told Adam Nelson to make sure he had 2 legal throws either.

Stuff happens all the time.  Deal with it, and move on.

But know thy rules.  Because knowledge is power. 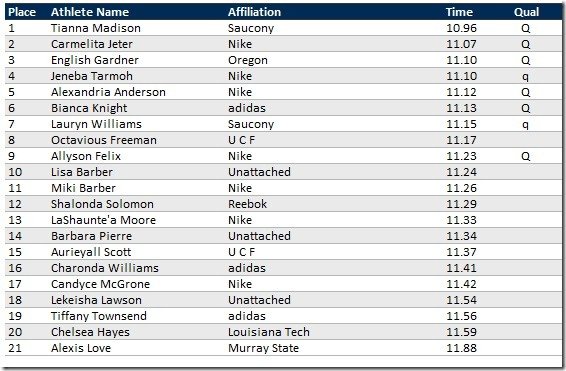