I’ll get to the point.

400 meter supremacy is cyclical, and it’s a very exclusive club.

When will see the first non-American to break 44 seconds for the 400 meters?

Will it be Kirani James? Luguelin Santos?

Sub 10.00 second 100 meters is common place now, and to some degree, a sub 20.00 200 meters.  Top speeds are getting faster, but why aren’t we seeing better speed endurance with faster tracks and lighter spikes?   Is speed endurance that hard to develop?  And why is Jamaica so rich in 100m sprinters, but not 400 meters?  (I’ll save that editorial for another post)

Success in the 400 meters comes from 2 factors:  speed reserve and lactate tolerance (which is really a combination of speed endurance and special endurance).  Speed reserve, which by definition is the differential between your top running speed vs. actual running speed, has improved at the world elite level.   So the limiting factor must be lactate tolerance… or the undesirability of those workouts!

We haven’t seen a sub 44 second since 2008.  Will we see one in London?  If the weather is terrible, or windy, then it will be unlikely.  It may even be the slowest winning time in years. 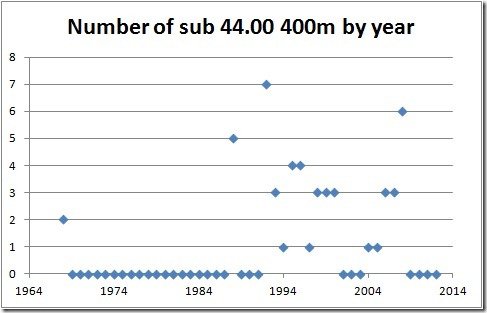 Success breeds success, and once we see a sub 44 400 meters performance, we will see a rise in 400 meter supremacy once again.