The Loneliness of a 400 meter Runner: The Re-Runs

You are here: Home / 400 meters / The Loneliness of a 400 meter Runner: The Re-Runs
12
SHARES
FacebookTwitter

Here are two bizarre stories with protests and re-runs (no coin flips), and both involve the 400 meters!

One of the most unusual protests at the 2012 World Junior Championships in Barcelona was the Men’s 400 meters semi-final.

Kenyan Alphas Kishoyian was in Heat 1 of the semi-final, but he wasn’t settled in his blocks when the starter called “SET”, despite being in Lane 6.  The gun fired, and Kishoyian expected a call back or false start, but that never happened.

That protest was overturned, and he was allowed to do the re-run at the end of the night.  Alone.  Yes, that’s two races in the same day.  However he had to beat 46.49 to qualify for the finals (i.e to be one of the 2 fastest losers of the 3 heats).  Not an easy task. 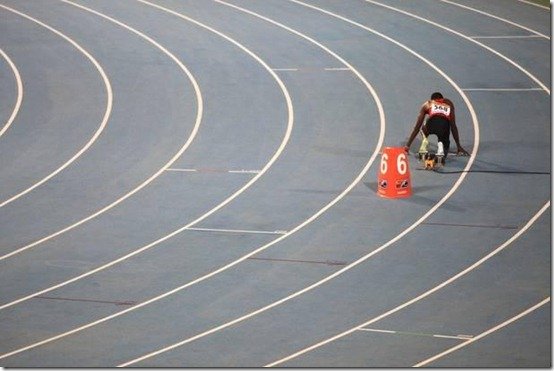 The pressure was unreal, and the spectators, who stayed until the very end, cheered him on every step of the way.  There was drama in the air, and this was only a semi-final!

Here is the amended official results.  If you look at the photo-finish, you don’t see Alphas Kishoyian anywhere as he was last.

To add more drama to the bizarre ending of the 400 meters, there was a TIE for 3rd place.  Remember the How to Settle the Allyson Felix, Jeneba Tarmoh Tie-Breaker story?

No re-run or coin-flip was used as both USA’s Aldrich Bailey and Australia’s Steven Solomon both finished 3rd in 45.52.

The U.S. women’s 4×400 relay team will also do a runoff for a qualifying time into the finals of the 2012 IAAF World Junior Championships.

When the batons were passed, it was clear via video evidence that both teams had passed outside the zone, so the protest was denied. However, Team USA appealed that decision and it went to the championship’s Jury of Appeals, which was upheld!  The jury took into consideration the special circumstances:  young inexperienced athletes, different (inexperienced?) judges, different guidance, etc.

The re-run is scheduled for 11:00 a.m on Sunday, followed by the Finals at 7:45pm!  USA has declared, but Romania rejected the offer to run.

Team USA must run a time of 3:39.44 or faster to earn the final qualifying spot in the final, and they must use the exact running order of Kendall Baisden, Robin Reynolds, Kiara Porter, and Olivia Ekponé.

No other teams will be impacted because if Team USA runs the time, it will be the 9th qualifying spot (i.e. Top 3 plus 3 fastest losers, instead of 2).