This article was written at 7:00pm local BST, 45 minutes before the start of the Men’s 100 meter semi-finals London Olympics.

If the weather holds up, and we get favorable tail winds, then all the talk will be about the fast track.  I wrote about the new Mondotrack surface at the London Olympic Stadium

In my bold prediction, based on the Men’s Heats, the current weather & wind conditions, and the Woman’s 100 meter Finals, I think Usain Bolt will win in 9.66 seconds with teammate Yohan Blake will come second in 9.68.  USA will fill the 3rd spot with either Tyson Gay or Justin Gatlin. 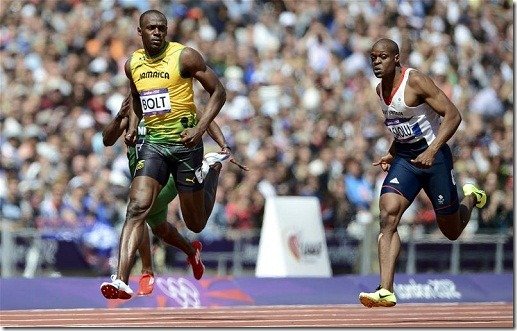 But the big talk in the athletes village is the track.

There will a time, like the now banned Speedo LZR speedsuits, where technology will determine the winner.  (And of course, pharmaceuticals, but let’s save that discussion off-line)

"It was surprisingly easy," said USA’s Ryan Bailey, despite what he described as a slow start en route to a 9.88 in the Heats.

Team GB’s Dwain Chambers, who had not met the Olympic A qualifying standard of 10.18 this season, had his best time of 10.25 to win the Olympic trials in Birmingham.  He ran over two-tenths of a second faster to win his heat in 10.02.

In January, Team GB’s Harry Aikines-Aryeetey spoke about the unique track surface. Wherever he competes, the former world junior 100m champion takes a cricket ball to test the track for hardness – for which read, in general terms, speed. "On a normal track it bounces to knee height. On [the London] Mondo track it comes up to your hips.