I had predicted the order correctly with the top 4 finishers a few hours ago in this article.

It was perfect weather for sprinting: temperatures hovering around 20 degrees Celsius, a NICE tailwind of +1.5 wind and clear skies. It had rained earlier in the day, as I got soaked at Victoria Park, my headquarters during the Games.

It was a seasons best for Tyson Gay who ran 9.80 and just missed the Bronze medal.

Even Ryan Bailey equaled he PB from the heats and ran 9.88 again.  That is one hellava feat, to run 3 hard races in a span of 30 hours.  I can just imagine the CNS overload! 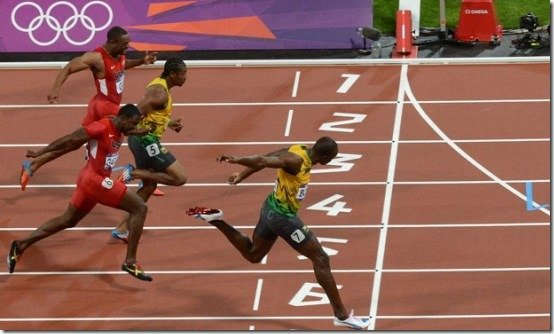 The Race was almost called back!

Did anyone see that plastic bottle being thrown when the runners were in the SET position?

But back to the race.

It really was a Final to remember with 3 Jamaicans, 3 Americans, Trinidad and Netherlands.

Had Asafa Powell not get injured, I can assure you all 8 finalists would have broken 10.00 seconds.  This was the fastest Olympic 100m final ever.

But so many questions now.

How about the 4x100m relay with Asafa injured?

Should Usain Bolt run the 4x400m with Team USA having no individual 400m in the Finals?