I often wondered how some of the Women’s world records were almost impossible to break (with the exception of the recent additions of the Pole Vault, Triple Jump and Hammer Throw).  The reason was possibly the “looser” drug testing policies from the 1980’s.

But Australia’s Sally Pearson came ever-so-close with her 12.28 last year at the 2011 Deagu World Championships.

People think she can break it because “Speed Wins”, just like USA’s Gail Devers who also excelled at the 100 meters open race.  Sally Pearson comes in with a 100 meter PR of 11.14. 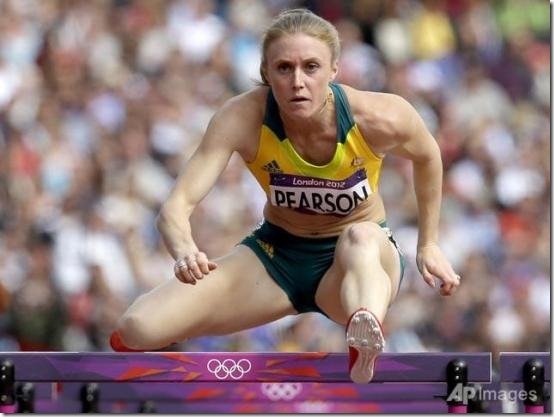 Sprinters (and their coaches!) analyze stride length and stride frequency at nausea, and for some coaches, the holy grail is reducing ground contact time.

The 100m sprint can be summarized as ~45 synchronized large leaps and bounds, unless you are Usain Bolt where it’s “only” 41 strides.

But the high hurdles has those darn sticks in the way.  Just ask:

Yes, the high hurdles is a sprint, but instead of being obsessed with stride length, stride frequency, & ground contact time, it’s about clearance (i.e. flight time) and the run time.

Take a look at some stats: 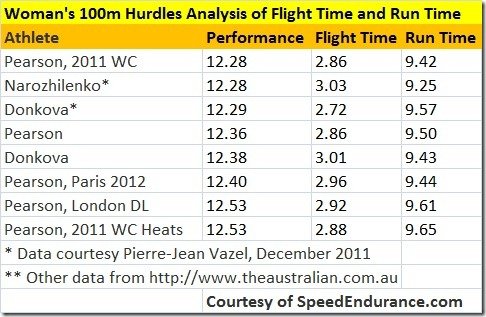 Obviously, you want the fastest flight time and run time without compromising the total time.

If she can get all 10 hurdles at 0.27, that would be 2.70 for total flight time and with her given speed, she will easily break the world record, assuming not compromising the run time.  (Pearson’s PR for 100 meters is faster than Donkova)

When you consider 8.50m between hurdles, and a 3.20m total flight clearance, that leaves 5.30m for 3 strides (1.77m) instead of the usual 2.17 in normal sprinting.  So having speed helps, but it’s having a faster “stutter steps” speed between hurdles faster than everyone else.

The London Mondotrack Track is fast, but hopefully not too fast so you have to chop your final step or else you will crash into the hurdles!  Hey, it’s been done before!