The Olympics are full of human interest stories, as well as (stupid) stories of officials having too much power.

I met Kim Collins in Rome last May, and you can hear the interview here.

He was the flag bearer at the Opening ceremonies (his 3rd time by the way) for 5 athletes and 9 officials.

But Kim Collin’s wife/coach was not accredited, so she had to stay at a nearby hotel, and she is also the personal coach to two of the other other four athletes on the team!  How in hell does a coach have 3/5ths of the total athletes (60%) of the entire team and does not get accredited? 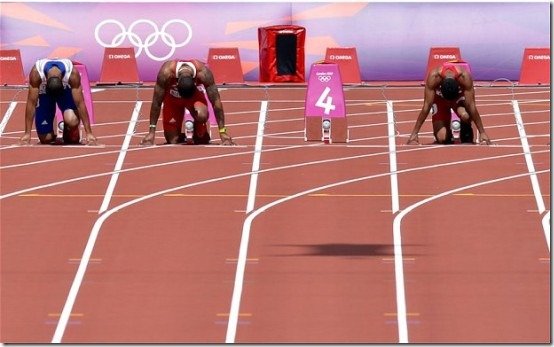 St-Kitts’ NOC suspended Kim Collins because he left the Olympic Village to spend a couple of days with his family and didn’t tell his Olympic Committee.  As Kim Collins quoted, “Even prisoners get to see their wives”.

And that explains the empty lane 4 in the morning heats of the 100 meters on August 4th.

(special thanks to Stuart McMillan for some of the info)

Madeline de Jesus was a long jumper and part of the Puerto Rico’s 4x400m relay team at the 1984 Olympics in Los Angeles.  (I love it when we see jumpers and hurdlers running the 400 meters!  They show guts!)

See also  Break the Box: The Case for the Three Point Start

When she injured herself in the long jump, she asked her twin sister Margaret who was in Los Angeles AS A SPECTATOR to run her second leg in the qualifying round.  How many spectators can step up and run a world class 400m?

The Puerto Rico head coach was so furious, he disqualified his own team by not letting them run in the Finals.

In a way, he did the right thing by following the rules, but I’ll bet the 3 other ladies on the relay squad were more furious they didn’t run in the finals.