I started a few already, like the Kim Collins being sent home for “disappearing”.

So here are some various tidbits that deserve some explanations and trivia.

The 200m Blake vs Bolt Hype

Of course I hyped this story up.  I was getting 17,000 visitors a day at the start of the Olympics and with over 20,000 newsletter subscribers, plus 4000 Facebook fans and friends, I needed something to make YOU 40,000 people buzz and engage.  I could have made a “Don’t do Squats” or “Don’t do Sprint Drills” video and try to sell you a DVD.  Or, I could have written about the Steroid angle like “Bolt is Doping and You Know It”.

But at the end, I had a 20% chance of getting my bet right based on the responses, and I was wrong.

I didn’t care if I “embarrassed” myself because I made several people write back (who would never write or comment.. just lurkers and sponges and what we call trolls), and that engagement was all I really wanted.

I want to thank Frank Dick and Limkokwig University for hosting the Global Coaches House.  The seminars were top notch and the evening session had great Q&A interviews, but were at the same time as Athletics evening sessions.

So I had to make a choice.  Watch the events live or on big screen TVs at Canada Olympic House when I didn’t have tickets.  Or go to the seminars and sneak off to watch it some of the key events on the big screen TV downstairs.

At the end, I chose to the latter, and I’ll be posting the videos of Jessica Ennis and her coaches, as well as Sally Pearson’s coach Sharon Hannan. Stay tuned.  These were definitely one of the highlights of my trip for any coach.

It was nice to see a tribute to Bud Winter, who once gave a series of seminars to Glenn Mills and Stephen Francis, the coaches of Usain Bolt, Yohan Blake, Asafa Powell, and Shelly-Ann Fraser Pryce.

Even Botswana’s Amantle Montsho who came 4th in the women’s 400 meters.

His two current books for sale are So You Want to be a Sprinter and Rocket Sprint Start with Relax and Win coming out shortly.

Who Won the Shoe War?

In 2008, I wrote an article about Who Won the Shoes War? PUMA, NIKE or ADIDAS?

Here is a great article of Nike vs Adidas, but there was no mention of Puma.   Between NBC for TV rights and Nike,  the Olympics is big business.  Very Big.

If it weren’t for Usain Bolt, Puma would be unknown right now, next to Saucony, Ascis, Mizuno, Brooks, New Balance and Li-Ning.

How many people mentioned the men’s middle distance events when all the finalists wore Nike spikes of the same colour?  The florescent yellow spikes? 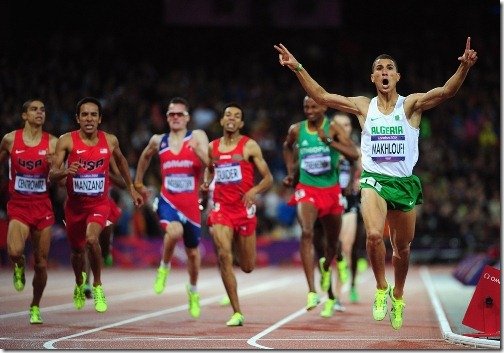 According to the local British papers, the top 3 were Leryn Franco, Ryan Lochte and Jessica Ennis in that order. (combined results from both sexes)  They didn’t mention Lolo Jones.

For those who don’t know, Leryn Franco is a javelin thrower for Paraguay and she competed in Beijing 2008.

For those who remember, she appeared in the 2011 Sports Illustrated Swimsuit Issue.

I won’t post any images of these athletes, but you can use Google images to your heart’s desire.

We’ve seen some officiating blunders that led to re-runs at the WJC.  Bad officiating is rare at the Olympic level, but it did happen in the Hammer throw.

You have to feel for the Chinese woman who thought she had a bronze going into the final round.  But the officials had a “lapse” and forgot to enter a previous mark.  We’ll never know the “best effort” if she knew she was currently in 4th place.  They should award 2 bronzes, just like synchronized swimming when the judges make scoring errors.

Or maybe she can hope for a drug positive test and get bumped up… oh, that happened already with the shot put!

And don’t get me started on the CAN-USA QF women’s soccer game.

I can’t believe no one mentioned USA jumper Will Claye? He came 3rd in the Long Jump 2nd in the Triple. Last time someone doubled in LJ & TJ was in 1936! And it was a Japanese guy who did that!

On the USA team, there weren’t many that doubled… I can only think of Carmelita Jeter, Allyson Felix, and Galen Rupp.  Making the USA Olympic team in itself is an Olympics.

I didn’t have access to any NBC coverage if they mentioned this rare feat, but they are probably still talking about Lolo Jones.  (I guess the word “coverage” is a loose term)

BTW, Mike Conley was also an awesome LJ-TJ-200m guy back in my days, and I actually beat him in the TJ back in 1985.. technically.

Running on a Broken Leg

The 4x400m broken leg story is old, but it reminds me of the Japanese Gymnastics Team competition with Shun Fujimoto at the 1976 Montreal Olympic Games.  He was a late replacement for Japan’s #1 gymnast.  Imagine breaking your leg on the floor routine, then doing the pommel horse, and finally landing from the rings on a broken leg!   This was his first and only Olympics and to this day he has never fully recovered.

When I was watching the 4×400 Men’s heats , I didn’t understand why Manteo Mitchell was running so poorly, and in a split of 46 point.  Surely he wasn’t saving himself for the Finals, or Zurich for that matter (sorry, Suzy, and I’ll stop calling you Shirley)

Now that is “taking one for the team”

Too bad USA lost in the Finals, but I’ll save the relays for another post.