On Aug 11th, I missed the final day of Athletics at the stadium to attend an evening with Sharon Hannan, coach of 100mH Gold medalist Sally Pearson.  I could always watch the races later on BBC, but hearing Sharon Hannan live is a rare treat.  Just like Jessica Ennis and her coaches three nights before during the 800m and 200m finals!.

Sharon was interviewed by Frank Dick for over an hour, followed by a reception for another hour.

It was great to hear the stories, training tips, and philosophy of this female coach in a male dominated profession. Plus all the challenges being a coach in Australia (Video interview later on the Blog)

I had a chance to ask a few questions that wasn’t covered in the Frank Dick video interview, but after 7 minutes, I turned off my recorder and we freely spoke about anything and everything.  I felt it was better dynamics than have a microphone shoved up your face.

Sharon, if you are reading this, I hope you found your camera and credit cards!

In the audio recording, you will also hear John Bales, the CEO of Coaching Association of Canada (CAC) butt in and ask a few questions, too. 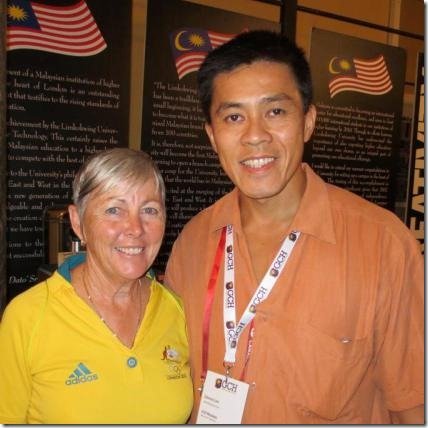 I asked her about: