Next to genetic talent, years of consistent injury-free training and good nutrition, it appears that the difference between the winner and loser is Technology and Pharmacology.

I’ll skip the Pharmacology part for now, as that would take up an entire Blog.

As we see more and more world records fall on both able bodied Olympics and Paralympics, you have to ask yourself what percentage of the improvement is technology?  Remember the Speedo LZR suits from the swimming events in Beijing?

In Track and Field, especially the sprints, we measure what we can measure.  And that is the wind and altitude.  Anything less than +2.0 m/s wind and 1000m of elevation doesn’t have an * asterisk.

But does it end there?

Some people claim the MondoTrack is producing faster than expected results (i.e. look at all the SB, PB and WR in the sprints, especially in the 4x100m relay).  I’ll save the MondoTrack discussion for a series of articles at a  later date.

If you watched the 2012 London Paralympics, you probably know the story of Oscar Pistorius trying for the 100-200-400m trifecta.

But his 200m gold was “ruined” by Brazilian 200m sprinter Alan Oliveira who was 8 meters behind at the the 100m mark.

Oliveira won in 21.45 seconds, storming down the home straight to win by 0.07 seconds.

Take a look at the photos below, and you can make your own assessment. 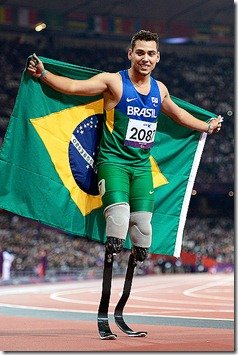 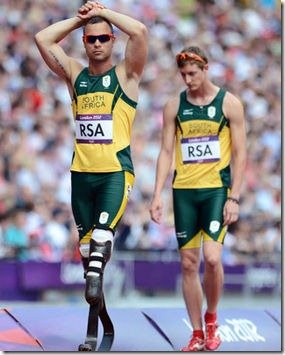