This note came from Vance Jacobson though an email today…

Raymond Yeck, our friend and fellow competitor, passed away peacefully in the early hours of Saturday, September 8, after a 3-plus year battle with cancer.  I recall in 2008 when I complained of gaining weight, he claimed some challenges in maintaining his weight.  It was shortly after that when Ray was diagnosed with what eventually evolved into a form of adult leukemia.  After years of aggressive treatments and comebacks, including the 2011 World Masters Athletics Championships in Sacramento where he ran the 100 meters, Ray lost a courageous battle beyond which most of us could imagine. He was 64.  A long time masters sprinter, Ray was a perennial finalist in the 100 and 200 meters.

In 2008, Ray was at his best at Outdoor Nationals in Spokane where he joined Stan Whitley and Charles on the medal stand for the M60-64 200 meters (photo below).  His condition was particularly close to home for me as my father lost a similar fight against the disease. 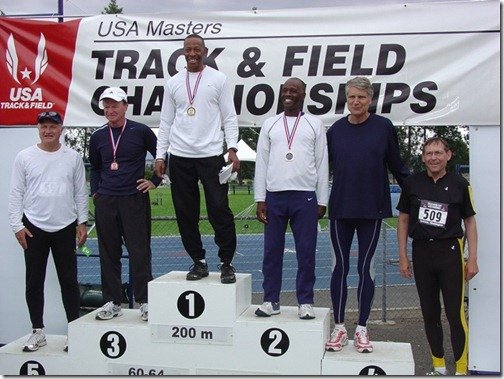 Ray touched lives in a positive way in his work. He was an Information Technology consultant who made a difference in his ability to advance clients’ access to business through the internet and the quality of work life his systems brought to the employees who work for those clients.

As Roger Parnell put it, "our peer group, the circle of friends and competitors, has just gotten smaller".  In that regard, Ray wants us to make an extra effort from this point forward, to enjoy each other as competitors and most of all, friends.  He believed it gave him the strength to confront all the challenges he faced.  And, I have heard from a reliable source that he has drawn lane 4 on a permanent basis!

Ray’s wife Kathleen asked that I write a note to all of you in hopes that, in turn, you forward it on to other masters competitors.

If you would like to send a note or card, their home address is: Kathleen Yeck, 4981 Ridgeview Drive, Antioch, CA 94531.  A "celebration of life" will take place probably in late September.  Kathy will get the word out to all.