This is Part 10 of a multi-part series from my recent trip to Orlando & Clermont, Florida.

Part 1 was with Dennis Mitchell.  Part 2 was with Brooks Johnson. Parts 3 & 5 was Hurdle Touchdown Times with Kellie Wells Training and Part 4 included Håkan Andersson.  Part 6 was my interview pre-London. Part 7 was with Stephen Maguire, coach of visually impaired sprinter Jason Smyth who was 0.04 seconds off to make the able-bodied Olympics, but won the Gold medal in the Paralympics in 10.54 .  Part 8 was a run-in with USADA and out of competition random drug testing.  Part 9 was an interview with Lance Brauman, Coach of Tyson Gay.

During that short visit, I did manage to have dinner with S&C coach Randy Hadley.  It wasn’t recorded but we did talk about training methods and balancing the weight room session with track sessions.  It’s a fine line with elite athletes, and the purpose to these sessions is to make you stronger, not to get you injured!

S&C sessions also helps also help identify any muscle imbalances.  The best athletes in the world are the best compensators.  When the main muscle group “fails” or needs additional help for your fast-acting levers, it has to call on other muscle groups.  So you better be well rounded in your total approach to strength and conditioning. 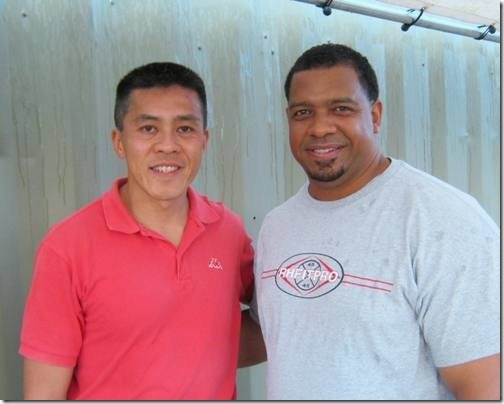 There are a series of videos on Stack TV:

I am a big fan of explosive lifts, especially Olympic lifts.  It works for us.  Your mileage may vary.  We do Power Cleans (off the floor), Snatches, Hang Cleans and Hang Snatches as part of our repertoire.

Take a look at David Oliver doing the Hang Snatch under the watchful eye of Randy Hadley.

I, too, follow the 5×5 sets/reps early in the season, but go as low as 3×3 for the snatches.  With squats and bench, I may go as low as 3×2 reps.  The reason is “lesser" weight anytime you lift over your head to avoid injuries.  By doing 3 reps instead of 2, your weight is slightly lower.

To my credit, into my 4th decade of coaching, we have never sustained an injury during Olympic lifting.  Proper technique is crucial.