DISCLAIMER: SpeedEndurance.com does NOT endorse or promote the use of performance enhancing drugs that are on the IAAF list of banned substances. It is YOUR responsibility to evaluate the accuracy, completeness and usefulness of any information, opinion or advice contained in the content below.

Next to diet pills, the next big fad in the consumer market is anti-aging products and that includes testosterone, growth hormones and even Deprenyl.  Basically, we all want to either lose weight or gain muscle!

So what are your choices in increasing testosterone?

Abbott Laboratories’ Androgel, a billion-dollar selling testosterone gel that can be applied to the shoulders and arms.

And then there is Eli Lilly’s Axiron is an underarm gel that rolls on like deodorant.

And more is coming, trust me…

For more research on Testosterone, here are the top 5 reads on this Blog: 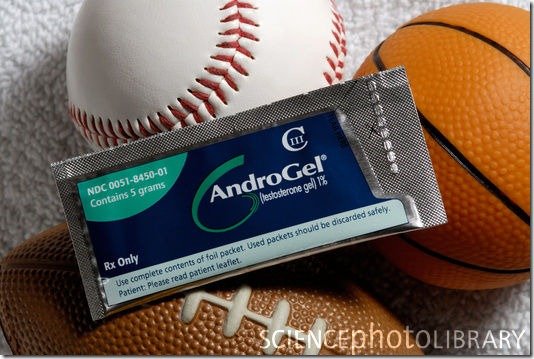 Former marathon runner Damon Lease, 50, had been complaining of low energy and depression, for which his doctor prescribed a combination of four psychiatric drugs. But since he started taking twice-a-week testosterone injections in May, he says he’s been able to stop taking two of the medications and hopes to eliminate them completely. He says he has more energy, improved mood and concentration.

“I spent 27 years running long distances, I like biking, I like hiking, and I guess every guy wants to have an active sex life … I want to keep doing those things as long as I can,” says Lease, who works as a software company executive. “I feel 20 years younger.”

Despite its rising popularity, testosterone therapy is not completely new. Testosterone injections were long used for men with hypogonadism, a disorder defined by low testosterone caused by injury or infection to the reproductive or hormonal organs.

But the latest marketing push by drugmakers is for easy-to-use gels and patches that are aimed at a much broader population of otherwise healthy older men with low testosterone, or androgen deficiency. The condition is associated with a broad range of unpleasant symptoms ranging from insomnia to depression to erectile dysfunction. Drug companies peg this group at about 15 million American men, though federal scientists do not use such estimates.