By definition, the term “ultramarathon” refers to any race “greater” than 26.2 miles or 42.2Km.  Some runners consider a 50Km an “ultra” but that’s just a marathon with a 5 miler added to it.  Sorry.

So to me, anything over 50 miles (which is almost two marathons) is considered an “ultra” in my mind.   A 100 miler would be the ultimate just because it’s a nice even number, close to four marathons.

Thus the Lake Tahoe 72 mile ‘round-the-lake Ultramarathon is an ideal stepping stone to your first 100-miler and it’s also at over 6000 feet altitude to make it more challenging.

I assume race organizers (i.e. Les, Angel & Lucia) wanted to time this race along with the Sunday regular 26.2 mile marathon (with a 7am start time), so the start time for the ultra was set at 10pm.

This was going to be one long night… 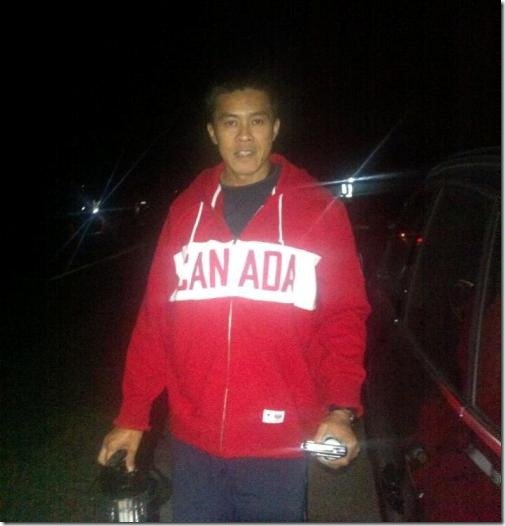 Last year, my friend Mike ran the Tahoe triple marathon, which meant 3 marathons on 3 consecutive days.  (The first day is extended an extra 4 miles for 3 x 26.2 since the lake is 72 miles in circumference.)

This year, the challenge was a single day straight 72 miler.  The first goal was just to finish, since his longest training run was only ~30 miles.  The second goal was to finish before 12 noon (14 hours).

I wonder who had it worse?  The runners?  Or the crew who had to stay awake the whole night?

Luckily my car had satellite radio so I had it set to Sirius 020, or the Springsteen channel.  Yes, 14 hours of Bruce Springsteen.  It was that or a Jack Kerouac audiobook.

See also  If Your Long Hair Touches the Track in the Set Position, Is This a False Start?

Plus, I had a lot of food, along with SNAC’s Performance Enhancement Drink.  I know what you are thinking.  PED is for athletic use, but like 5-hour energy shots or RedBull, it can be used for non athletes in non sporting environments, like staying awake studying for Final exams!  I ended up drinking 2 portions at 3am and 7am, just to stay awake.

I am a firm believer that you should cover 75% of a race distance in training.  If you run 400m like me, I rarely run over 300 meters at a time in a training run.  If you want to run a half marathon (13.1 miles), then a 10 miler at least once within the final month is a pre-requisite.

In Mike’s case, he never did run a 54 miler, but he did do a 50 miler in February in the Run for Amma charity event.  (Sadly, Amma passed away a month later, so this race will have an annual honorarium… stay tuned for details.)  His longest training run was a 30 miler two weeks prior to the run.  At night.  Why?  To test the headlamps and reflective gear!  Leave nothing to chance.

The second challenge outside of training is calories.  According to Mike’s strategic coach Duncan Callahan, the “standard” protocol is to consume 150 – 300 calories per hour, and 200 – 250 seems to be the sweet spot for most runners.  A typical sports drink (electrolyte and fuel) would contain about 100 calories, so you have to either supplement with food or artificial food like goo, gels or shot blocks.  Anything less than that and you risk BONKing.  We had our vehicle loaded with the usual bottled spring water, EFS drink, sandwiches, granola bars, fruit, soup, and strong espresso coffee (after all, I am European!).

On the medical side, we had the usual sports tape, band-aids, ice packs, Advil, Vaseline, and RE-GEL.  Mike was nursing an injury prior to the run, and was using RE-GEL several times daily leading up to the race, even on race day.

The third challenge is staying hydrated.  Sure, the weather was cool and dry, so drinking was mandatory because you may not feel thirsty.  Most ultramarathoners run with a water bottle or camel pack.  The first 46 miles were not stationed, so you were on your own.  The last 26 was run on the same course as the marathon, however, you had to be within an hour of the regular marathoners or else the aid station would be closed.  That didn’t matter as most ultramarathoners have their own crew anyways.

Thanks to GPS and map technology, we had the entire course mapped out mile for mile with several nasty elevation gains that included 2 miles of straight elevation!  There were only 2 critical left turns (the race is run counter-clockwise) or else you’d end up in Carson City!  (do a Google lookup for US Highway 50, the loneliest highway!)

The race went according to plan for the first 46 miles, with our planned stops for extra food & fluids, as well as clothing changes.  Being a night run in the mid to low 40’s F, running in a sweaty shirt is not a good combination!  The 46 mile mark is at Commons beach in Tahoe City, the start of the regular single day Sunday marathon at 7am.  At this point, Mike arrived shortly before 6am or under 8 hours of running.   He passed the 50 mile mark at 8h44m, 4 miles into the Sunday marathon.  So far, so good… but…

Remember the 2nd challenge?  You had to consume food while running… and that is the biggest challenge for ultramarathoners.  If you can’t keep the food down, you end up force feeding and upchucking or chundering.  And that is bad.  Without food, your energy is gone.  You bonk.  And it takes a lot of will power just to keep moving.   Walking is the best option because that’s still 20 minutes per mile on a flat course, or 25-30 minutes per mile uphill.  And trust me, there were hills. 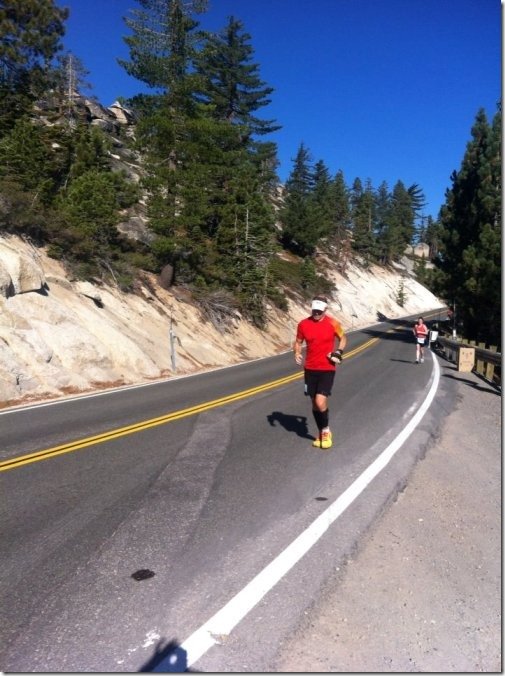 It’s only through trial and experience where you’ll learn new foods, and some foods will work better than others.  On this race day, we discovered Chocolate milk, which is normally a great post recovery drink because of the 4:1 ratio of carbs:protein despite the possibly of HFCS .

As a crew member, your first responsibility is the safety of your runner, even if it means pulling your runner out of the race.  Of course, they’ll kill you first if you try to do that.  That never happened, fortunately, but you have to watch for running gait changes, glazed eyes, sweatiness (or lack of) and all the symptoms of overuse and abuse.  Luckily the weather was relatively mild, but other ultras can reach 100F or 40C in the summer.

At 3.5 miles to go, the runners make a left turn into the woods and for the first time, you lose direct contact with your runner.  At this point, there’s nothing you can do, and it’s up to the runner to get to the finish line as you drive to the finish line (because the parking lot is a mile away!)

The last 22 miles were run in a pedestrian 5h41m, but that was expected with the big monster hills that would put Boston’s Heartbreak Hill to shame. 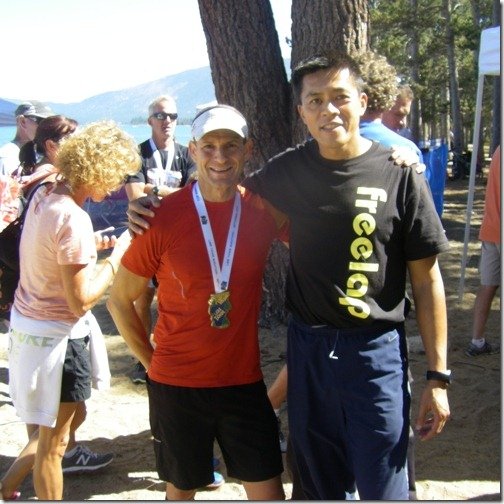