The IAAF Centenary Historic Exhibition is open to the public for six weeks from 13 October to Sunday 25 November inclusive.

The exhibit is free, and situated inside the Museu Olímpic i de l’Esport Joan Antoni Samaranch in Barcelona next to the 1992 Olympic Stadium or behind the Museu Nacional d’Art de Catalunya (MNAC) or National Art Museum of Catalonia.  The Olympic Museum costs 4.55 euros, which I’ll write about in the next article.

In the center of the room, they built an 8 lane sprint straight, 12 meters in length with glass showcases around it.  In the middle of the “track” was a throwing ring with implements and starting blocks on demonstration.

There are over 300 artifacts from around the world, most of which are on loan from the former athletes.

Moreover, a Centenary Banquet will be hosted in the Drassanes Museum (the MUSEU MARÍTIM DE BARCELONA or MMB) on Friday 23 November and the following evening (24th) a unique Centenary Gala Show will be held in the Museum of Catalonian Arts (MNAC).  Here is the list of athletes who (so far) have confirmed their attendance to the Gala (click here for the list). 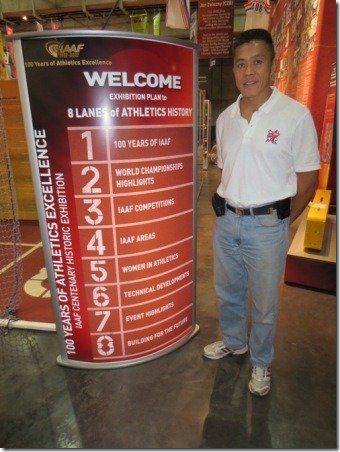 Built on and around a specially laid Mondo track, the main 8 displays, which appropriately for this exhibition are called ‘lanes’, cover the history of the IAAF and Athletics, in text, photographs and video.

Below are some random photos which needs no explanations.  If you are in the Barcelona area, be sure to visit the museum. 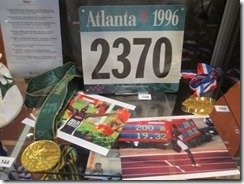 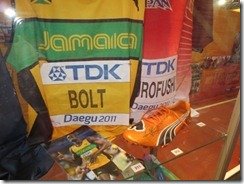 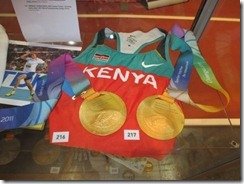 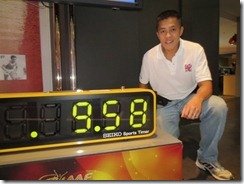