This is part 6 of a multi-part series on hamstring pulls and rehabilitation.

I discussed hamstring pulls in several past articles:

At SpeedEndurance, I like to give real live examples of how people really train, and not present vague PowerPoint slides.

Before I moved to Europe in 2009, I had a track team with Derek Hansen back in Vancouver.  (Derek and I put a lot of our conference material at http://www.strengthpowerspeed.com/store/ with more to come)

Our club was fairly successful given the size, our facilities and inclement weather conditions.  One was a Bobsledder that represented Canada at the 2006 Torino Winter Olympics, and one was a sprinter that won a bronze medal at the 2006 Commonwealth Games 4x100m relay.

So in this article, or should I say diary, we go back to 2008 when our Bobsledder, Steve Larsen, pulled his hamstring.

In 2008, I had the opportunity to do some hamstring rehab work on an athlete I had worked with in the past. He had been training another city for the past year and had torn his hamstring in a 30 meter sprint test. Four days later, he eventually made it back to my city and we had to undergo some pretty intensive hamstring rehabilitation. He had four weeks to be ready for his first competition (bobsled). This would have been more than enough time for us to work with him. Having worked with sprinters and speed athletes for some time, it was pretty familiar territory for me. I had no doubt that we would successfully rehab him in time for him to compete in top condition. It is important to note that the process we undertook is no different from the framework I outlined in an article titled Rehab and Dating Success on my site http://www.runningmechanics.com/.

The first day he was back under my supervision, we started with evaluation and observation. Simply speaking with the athlete and asking him about the injury and how it feels (standing, walking, sitting, getting out of bed in the morning, etc.) can yield a lot of useful information. Given that we were five days out from the initial injury, inflammation was not a significant concern for us. It was more about determining the athlete’s level of mobility and comfort.

Working Around the Injury 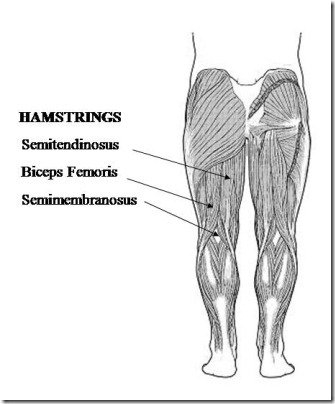 After letting the athlete walk around and passively test the hamstring, we had him lie down on his stomach. I carefully probed around the hamstring to determine the extent of the injury. He had indicated that the main injury was located around the middle to upper portion of the left hamstring, specifically in the semintendinosus. I performed light massage on the hamstring using massage cream to ensure that the passes were superficial and not stretching the muscle and fascia too much. My main intent was to determine the status of muscle tone for the strained muscle (above and below the injury site), as well as the tone of surrounding muscles (biceps femoris, semimembranosus, gracilis, adductors, soleus, gastrocnemium). As you might expect, every muscle was hypertonic and bordering on spastic. I continued to work all of these muscles, including the gluteal muscles, to not only bring down muscle tone but also increase circulation around and toward the injury site to facilitate healing and increased suppleness.

It is important to note that I did not work into the injury site on this first session. There was a lot of work to be done elsewhere in the surrounding tissues. I did not feel that it was prudent to work into the site, given that the athlete was only five days out from the injury and endured a 12 hour drive the day before. Another consideration was that I did not have to get him ready in 10-14 days. I had a much longer time-line and exercising caution was the best possible option.

After loosening him up sufficiently, we had him perform some easy accelerations over 5 to 10 meters to see what he could do. I made it explicitly clear to him that he only needed to exert himself in a safe manner at 50-60% of his top acceleration rate at best. As you can see from the first video below, his running stride is significantly hampered by the injury and his foot placement on the left side is very guarded. This is normal under these circumstances. The intent of each run is to run as naturally at possible, at a conservative pace, without putting the hamstring in danger of re-injuring. I tell the athlete that he should feel a slight tug on the hamstring, as if it is being worked lightly, but not to the point that it becomes sore.

After performing a number of sets of 5 repetitions over 10 meters, the athlete indicated that he felt the hamstring getting noticeably tired. In this situation, you have a number of choices. You could have him take longer recoveries to ensure there was little to no fatigue in the muscle, or you could change the type of work. We decided to change the type of work. In the video below, you can see that we decided to do a running high knee drill (Running ‘A’… see the article on Gerard Mach Drills). This drill allows him to perform dynamically without putting the hamstring in danger of re-injuring. The action is primarily vertical in nature, unlike actual sprinting which requires a greater horizontal extension component. He is permitted to work aggressively in a manner that bolsters good running mechanics, builds lower leg elasticity and rigidity,and gives him the feeling of performing a full workout, as this is an important psychological factor in rehabilitation.

See also  The Science Behind SNAC's PED (Performance Energy Drink), and Why it Works

Initially, working over 5 meters is sufficient to work the running motion, which should work out to 15 to 20 steps when performed correctly. Recoveries between repetitions, in this particular workout, may be between 1 to 2 minutes, over 4 to 5 reps total.