When Do You Start Wearing Spikes?

You are here: Home / Coaching / When Do You Start Wearing Spikes?
8
SHARES
FacebookTwitter

This is a two-fold question.

One is when do you start wearing spikes in training.

The other is when do you put on your spikes before your race?

When do start wearing spikes in training?

It depends if you are training short-to-long or long-to-short.

With short-to-long, if you train 48 weeks a year, then you are doing acceleration development 48 weeks a year.  This means wearing spikes for the short speed workouts, even if it’s only 10 or 20 meters.

With long-to-short, we stay in training flats (i.e. regular running shoes) until we go indoors.  During my McGill days, that meant early January.  I would often race at Dartmouth Relays in the first weekend of January, and would be putting on my spikes for the first that season.  It’s not a big deal if it’s NOT your first year running track!  You know what they are supposed to feel like!

Nowadays, indoors usually means November or December 1 and sometimes you can even race in mid December.

(SIDENOTE: read the Pre-Race Routine: Getting into the Starting Blocks)

One of my favorite pre-race routines was doing a 150m fly nearly all out (say 95%) in spikes about 20 minutes before a 400 meters.  Usually I did these after 4 x 30m wearing spikes. (or progressive starts without blocks, usually falling starts, and do a progressive ladder of distances like 10-20-30-40m)  For best start possible in any sport… 2 point start, 3 point, 4 point, check out Derek Hansen’s video Start Mechanics and Training Applications.

But with my Achilles injuries re-occurring year after year, I decided to wear my spikes as little as possible.  That means not even wearing them in the warm up.  I would put them on (with laces tied loosely) just before they marshaled us out to the track, then I would do one block warm up.  That’s it. 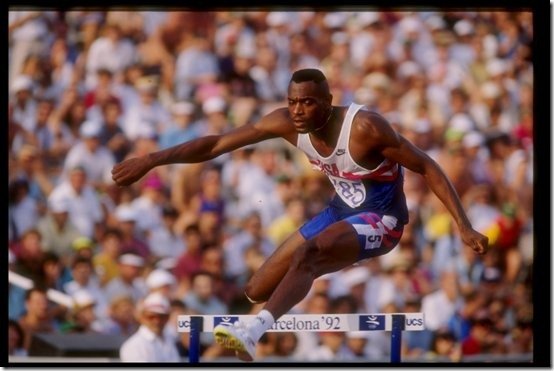 I reached out to Kevin Young, the 400m hurdles 1992 Olympic Gold medalist and world record holder of 46.78, as I heard rumors he wouldn’t put on his spikes until he got inside the stadium.

Kevin said he definitely warmed up in my trainers for jogging, strides, and plyo’s over hurdles.  But when it was time to race, he would lace up his spikes, stripped down, set in his blocks, jog through to the first two hurdles clearing them, walk back to his blocks… continuing in his own lane towards the 10th hurdle (grabbing it over the TOP). Then walked back to the start!!!!!  He would always visualize the finish, 8th-10th hurdles to the tape!

Finally, when lacing and tying your spikes, make sure you do the “runners knot”, which is the “double rabbit ear lacing” technique so they won’t come undone while running.  This technique can be easily undone by pulling the free lace normally, as opposed to a regular double knot which leaves a knot. Chris Coy showed me this at the 1997 World Police & Fire Games, and I have used it since. But who showed Chris? (heh heh)

JOKE for kids: say “runners knot” or “I must not” 5 times really fast

See also  How Do You Determine the Worlds Fastest Man?