You are here: Home / Coaching / Do you Like Indoor Track and Field?
90
SHARES
FacebookTwitter

I LOVE and I HATE indoor track and field.

I LOVE indoor track because it breaks up the long season from September to August.  48 week a year is a long way to go without racing.  How the hell did Dwayne Chambers, Justin Gatlin or LaShawn Merritt do it, I’ll never know.  You have to race.  Nothing can replace the nerves going into big meets.

Obviously, my biggest pet peeves about indoor racing are:

[Tweet “Nothing can replace the nerves going into big meets. You have to race. Even Indoors.”]

Last week, Stuart McMillan wrote a guest post titled Eccentric Strength (a recommended read), so he offered this piece on Indoor insanity.  Stuart worked with the USA Bobsled Team from 2000-06, the Canadian Bobsleigh Team from 2006-10, and UK Athletics’ Lee Valley High Performance Center with Dan Pfaff.   His resume includes medalists in the Four-man and Two-woman Bobsled at the 2010 Winter Olympics.  Visit his website at www.mcmillanspeed.com It’s that time of year again when folks get either far too excited or far too depressed about the outcome of races that matter very little to what will happen when the real track season comes to its apex later in the Summer.

Spending 20+ years in the Great White North, where the ‘outdoor’ season is barely 2 months long, I fully understand why some athletes get overly excited about the ‘indoor’ season.  In Canada, for much of the athletic population, the indoor season actually takes precedence over the outdoor season – as if you are on a University team, this is your only chance at competition with other Universities, for instance.  In many parts of the country the outdoor season is not only short, but the weather can be horrendous.  If you live in the prairies, for example, good luck if you’re a sprinter.  Rare are the race days when you will have a legal tail-wind.  You’re either running into a headwind, or it’s blowing a gale behind you.  If you’re on either coast, you lack both sun and competition.  Basically, your only chances of running qualifying times are the few opportunities in Ontario (or the rare and lucky legal race in Alberta), or by traveling south – a constant source of frustration for Canadian sprinters over the years – especially those lacking funds to travel.  And since the greatest density of US competitions comes fairly early in the spring (LA area in April-May, for instance), many athletes use the indoor season to gain the necessary competitive opportunities so they can be ready in time.

So in Canada – I understand it – this obsession with the outcome of different events 6 months and more from what you might actually be racing once the real season is kicking off.

Most athletes feel they need between 6 and 10 races to be in competitive shape (i.e. have become comfortable with the unique pressures of competition, have imbedded any technical-tactical changes, etc.), which is easily done without having to race a full indoor season.

So why the obsession with indoor?  And what’s the big deal anyway?  Why is this a problem?

I personally feel indoor competition can be potentially dangerous for at least three reasons:

Speaking as a sprint coach, and how it relates to sprinters specifically, I feel that running 60m races effects your 100m race model to the point where it can be very difficult to adapt to the increased patience required of the longer race once the real season begins.  The world is full of 60m specialists – those dudes who think they’re world-class because they ran 6.6 in a 60, putting them top-whatever in the world.  Problem is most ‘real’ sprinters don’t run them, so they get this false sense of superiority – a false sense of being on the right path (or even worse – a false sense of being on the wrong path if their 60m times are slower than previous seasons, while working on changing to a more efficient 100m model; this situation has bitten me personally as a coach on more than a few occasions).  Come the real season (the one that the rest of the world cares about; the one that has a real World Championships, real Olympic competition, with a more competitive population, etc.), where you stand at 60m of your 100m race (or for that matter, at 60m of your 200m race) has very little relevance to where you are at the end (and very little correlation).  Unfortunately for some, they don’t stop and hand out medals half-way though the race.

The experienced coach-athlete will attempt to run the same model – i.e. just run the 60m race the same way you will run the first 60m of the 100m – but this is difficult for even the most experienced sprinters. Placing the finish line 40m closer automatically changes the way you run the race.  Most sprinters will go through their phases more quickly, rushing to ‘get up’, and sprint.  Where in the 100m, athletes know they have plenty of time – in the 60m, everything becomes rushed.

The ‘60m specialist’ will often be sitting in great position at 60m of their 100m races, but end up going backwards over the last 40m having ran out of gas – not from a lack of speed endurance (- and this is important -) – but for a lack of an efficient 100m race model.  The inexperienced coach-athlete will not recognize this fact, and instead of working on the model, will add more speed endurance work.  Well – more speed endurance work added to a poor mechanical model just adds to additional strain on the system, injuries, and ultimately decreased performance.

I’m not one of those coaches that preaches purely process-driven focus.  At the end of the day, the outcome determines an athlete’s success.  But without an understanding of the process – without periodically letting go of the outcome, and immersing oneself in the details of your sport – the outcome is a shot in the dark.  For me, an effective balancing of process- and outcome-focused practice is one of the keys to effective coaching.  All process, and the athlete gets lost in the details; all outcome, and the athlete loses sight of what is necessary to get there.

There is reams of literature on how best to structure practice, but for me it all comes down to the coach working with the athlete to best identify what works best for that specific individual.  Some athletes require more time spent on process; some require very little.  Finding the balance is what it’s all about.

What I do know is that – for many – the false importance placed on competition during January and February – conscious or not – steals too much focus away from process, placing it on the outcome of a race that is different from that of the competitive one – at a time that would be better spent developing consistency and confidence in the specific model.

There are a few athletes who are ‘racers’ – those unique folks that just seem to get faster and faster through the season – racing themselves into shape, and actually often enjoy their best performances after their major championships.  Most, though, have a finite number of competitions that they can perform at peak level, before performances begin to decline significantly. Whether the burn-out is emotionally, psychologically, or physiologically driven is a moot point – most dudes just can’t keep it going for months on end.  Adding a 6 or 8 week indoor season to this is too risky for me. 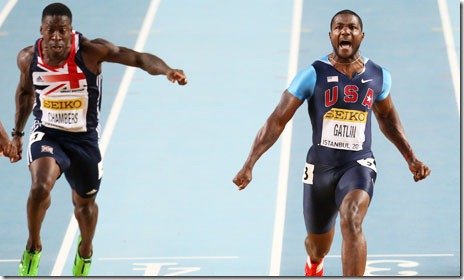 Can Indoors be Useful?

Can select indoor competitions be useful, though? I think so – in the right situation:

If you’re attempting to bed-in a new model and want to see how it will hold up in a higher pressure situation, an indoor race can give you the opportunity for that insight – as long as the athlete goes into the race with his focus entirely on process – knowing what the goal is.  Then – if the model breaks down; whether this comes from a lack of faith in the model, lack of experience, or some type of psychological mishap – at least you learn something.

The reality is – for some – the indoor season also gives the opportunity to make some much-needed cash.  With an overall less-competitive opposition, picking up a few nice checks can provide too great a temptation to resist.

Some coaches also employ a double-periodization model, where indoor competition is written into the YTP; in essence acting almost as a rehearsal period for the second ‘peak’  – the main competitions later in the outdoor season.  Although this is not necessarily how I would plan the year, such systems are used quite often, and can be successful.

Whatever the coach and athlete do, it must be well-thought out, justified, and individualized. My general thoughts, though, would be to kill indoor.  More than just the reasons I mentioned above, I really feel the over-emphasis placed on the indoor season in the UK has been detrimental to the long-term development of the nations’ sprinters.  Guys become indoor specialists. Their models develop in this manner, as do their mind-sets.