The Importance of the Standing Long Jump

You are here: Home / Coaching / The Importance of the Standing Long Jump
16
SHARES
FacebookTwitter

With the 2013 NFL Combine coming up, isn’t it interesting that the fastest 40 yard times come from players with the best Standing Long Jump AND the Standing Vertical Jump?  (using stats since 2000)  And the irony is some of these players have terrible sprint biomechanics (but who cares?  they are still faster than you)

Monday’s guest post by Joel Smith on 3 Reasons the Squat is NOT the Cornerstone of Strength Training for Sprinters proves a good point.

It’s not all about raw strength (i.e. max strength)!

It’s not all about the squat or bench press!

I feel plyometrics, traditional weight lifting, and Olympic lifts (i.e. all three) are vital for a sprinter.  They all have its place in the development of a sprinter, at any level.

The Current World Record for the standing long jump is held by Norwegian Arne Tvervaag with 3.71 meters or 12′ 2.1" and he wasn’t even a horizontal jumper!

In 4th grade, I was “discovered” as a jumper because I could standing long jump 10 feet (3.048 m) by clearing the mat.  (30 years later, I could still SLJ 10’ into a sand pit, but what does that prove about my sprinting speed?)

A good article to read is Nigel Lewis’ The Importance of the Standing Triple Jump from 2010. 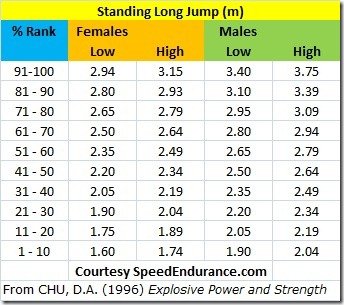