This is a 5 part article, but I decided to write it as a single post rather than chop it up.

The 4x200m is tricky because the incoming speed is still relatively high, but the runner is more fatigued than the 4x 100m.  I’ve seen plenty of DQ’s and DNF’s at indoor meets using a blind exchange for the 4×200.

In Youth 4×100 meter relays, I find it’s easier to keep consistent with the “give with the right, receive from the left” even if it means changing hands. I rarely see the baton fumble once they have the stick in hand. Their biggest problem is the incoming runner always runs into the outgoing runner, who is usually standing still.

2) Change Hands Immediately. Once you get the baton, you change hands immediately. You’ll notice Carl Lewis do this when anchoring a 4x100m relay when it doesn’t matter. I guess Carl is more comfortable using his right hand. (please, no jokes here) 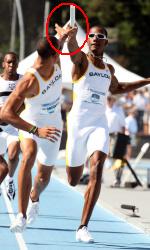 4) YELL first, THEN reach. Do not give the verbal command of “STICK” or “UP” and reach at the same instant. SHOUT the command, keep running, and wait for the outgoing runner’s arm to extend, then reach and place the baton in the open hand.

6) Outgoing Runner Grabs the Baton. When you feel the baton, grasp firmly, THEN use your arms to run. You can see in slow-mo replays how Tyson Gay didn’t have a firm grasp on the baton and his arm started to move forward before the stick was secure.

7) Don’t Let Go. Yet. Incoming runner does not let go until baton is firm in other hand.

8) Face the inside. For the 2nd and 3rd exchanges, when lining up on the track, ALWAYS face inside the track.

9) Incoming Runner Must “Attack the Zone”. Do not slow down or even relax until the baton is passed. Keep good running form.

10) Stay in your Lane. After the exchange, stay in your lane. Do not jump out to the left or right as there are runners behind you. Always look back before leaving the track preferably to the infield. 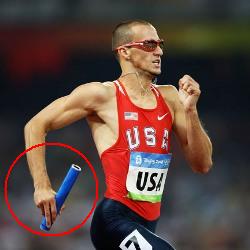 11) Hammer time. I prefer to grasp the baton firmly like a hammer. That may lead to tightness, but it’s better than having it knocked out of your hand which I’ve seen from experience. Some runners, like Michael Johnson or Jeremy Wariner holds the baton like a pencil which I’m not a fan of (see photo)

See also  Remember when France had the 4x100m WR?

12) You be the Judge. Don’t take off too soon or too fast. Outgoing runner must judge the speed AND fatigue of the incoming runner. 75% speed is safe enough.
If you have any more tips and cues, please post your comments below.

Personally, for the 4x100m relay, I don’t care what relay passing technique you use, whether it’s the Push Pass or Upsweep Pass.  As long as both runners (incoming and outgoing) are near full speed, and you can maximize the free distance with outstretched arms, then either one will work.  France & Japan are known for using the Upsweep Pass, despite the rest of the world using the Push Pass.

See 4×100 Relay Baton Passing – Upsweep, Downsweep or Push Pass? The article has a good video of the French National team relay camp training with the upsweep pass. Remember when France had the 4×100m WR?

John Smith is the most famous track coach with the anonymous name. I’ll bet he gets strange looks with the hotel clerks when he checks in!  Here is the video on YouTube:

If you like this video, please support John and Championship Productions by purchasing the video here:

This video of Jon Drummond was filmed while he was an athlete at HSI.  Several years later  as the head relay coach for the USA 2012 Olympic team, he came back with 4 medals, 2 of them gold and one World Record.  Pretty good if you ask me!

Maybe he showed this clip to the 4x100m team?

Take your best four 100 meter sprinters, and see how this formula works for you, assuming perfect exchanges. Theory is good, but you have to get the baton around the track!  Read:

Here are previous articles from technique, strategy and history over the past 5 years: