The Freelap Friday Five (2013 Edition) is back interviewing coaches, athletes, and athletes-turned-coach.  We have a stellar lineup for this series, so be sure to check in every Friday! To review the 16 part 2012 edition, click here

Today, Matt Scherer is probably best known as a professional racer or rabbit.  (In Europe, we call them pacers or just pace.  In the USA and Canada,  we call them rabbits)

Question 1:  You seem to be everywhere I go.. Harry Jerome in Vancouver, European meets, etc.  But first, the obvious question.  Have you ever felt good enough to finish your race after leading off with a semi-suicidal pace?  I remember the 1981 Olso meet where Tom Byers lead the race as a rabbit, then went on to win.

Matt Scherer: Since I became a full-time pacer a couple years ago I’ve adopted a different mentality when I’m on the track. I see myself as out there hired to do a specific job for the meet director and for the athletes. My job is to eliminate as many variables as I can for the other athletes. If they don’t have to worry about pace being on or breaking the wind they can focus more on the things that matter to them and thus perform better. If they all have to wonder whether or not I was going to step off the track or not, I don’t think I’d get many more jobs.

People have often brought up the Tom Byers Olso race to me and asked that question. I feel like Byers was using pacing as a way to get into races and prove himself as an athlete. I’m nowhere near in the same league as the Aman’s, Kaki’s, and Rudisha’s that I’ve been pacing for. In my mind I took my shot at stardom in the 2008 Olympic Trials and did my best. I don’t have any regrets about my competitive career and so don’t mind at all dropping out of the races I get to pace.

Question 2:  As a rabbit/pacer, what do you do when the rest of the field does not go with you? I’ve heard several TV commentators say you should just slow down, let them catch you, then pick up the pace again? Or, is it all about hitting the split exactly as ordered? If the meet director says to split 49.0, you split 49.0 no matter what? [and you do, of course!] 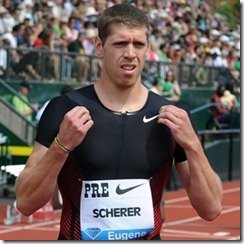 Matt Scherer:  That’s usually the toughest decision I’m faced with when pacing. There’s really no manual for pacing and circumstances never seem to be the same to where there can be a rule of thumb. But through my own experiences and watching videos of David Krumminacker (one of the best 1500m pacers ever in my opinion) it seems like a pacer can avoid that situation entirely if they go out conservatively the first 100-150 meters. When a gap forms between the pacer and the first runner at the beginning of a race the athlete must make a decision on what they want to do. And by my logic from the first question, if the runners have to spend time thinking about the pacer then the rabbit isn’t doing their job right from the start.

What I’ll do is go out with everyone for 100+ meters and worry about getting to the lead about 150m into the race. More often than not in an 800m race I will hit the break point in 2nd or 3rd place and then move to the front with no gap happening. That seems to keep everyone comfortable and things rolling from there.

If something happens and there is a gap that forms there are two options: slow down or keep going. Most of my jobs don’t have bonuses for hitting the correct time so to keep going is usually the lesser option. My job is to help create a quality race, either by fast times or competitiveness. So if I see that the group isn’t going with me I will usually slow down to get back in contact with the pack and then try to pull the pack along to regain the correct pace. It doesn’t always work but being in front there is only so much you can do.

Question 3: Your PRs are an impressive 45.1 (400m) and 1:46.1 (800m).  Tell us how you train.  For example, obviously speed is of an essence to run those fast early paces.  Are your workouts geared more towards speed?  What technologies or aids do you use to be like clockwork?

Matt Scherer:  My training partner is Mark Wieczorek (1:45.62 800m PB) and we do most of our training together which keeps me training like a true 800m runner. Then depending on our racing schedules we may branch off from each other at times. I usually need to work on faster stuff earlier in the season than him to pace fast 800’s where he’s more on a phase system training for one or two peaks during the year. I need to be consistent for a five month stretch from May to Sept.

As far as pacing-specific work I get to practice that almost every workout by leading intervals at Mark’s desired paces. And to tweak a common saying I would bring say this: you’re only as good as the equipment you use. By this I mean it wouldn’t be very useful to practice pacing if I didn’t have a way to be sure of my times. Splitting my watch as I go is ok but my job is judged on my ability to be on pace to within a couple tenths of a second or less. So to hedge against the downsides of manually timing workout intervals I use the Freelap Timing System as often as I can. I put down a timing sensor/receiver either at my start and finish lines or a specific distance in the middle of the interval. Running past the sensor auto-splits the watch I’m wearing. It’s the next best thing to having a fully automatic timing system with cameras that track meets use. Freelap is a lot simpler and easy to use, not to mention accurate to within 0.02 seconds. It’s one of the reasons I almost always hit my times in races.

Question 4:  What do you do AFTER your race?  After running a 50.50 split, that’s like a workout in your books.  Do you treat these races as workouts?  Do you go back to the warm up track and do some 150’s?  Or just jog down and grab a drink/shower and off to the next race? (I guess you did that last year with New York and Vancouver back-to-back?)

Matt Scherer:  Yes, most of the time I need to do additional work after a pacing job. It depends on the situation with the practice track etc. but if I can I like to do 6-10 x 200 after pacing a race. A 50.xx or 1:55.xx isn’t exactly a max effort so especially when I’m traveling a lot and have trouble getting workouts in I use pacing days to fill that training gap. In 2012 I had a stint where I had 8 pacing jobs in 4 weeks in 5 different countries (and 3 different continents) so I had to use some of those meets as training sessions to keep up my fitness.

And yes, sometimes I don’t have that luxury of having any kind of time between races. In one case I paced in China on Saturday and Arizona on Monday and in another I paced in New York on Saturday and Vancouver, Canada the next day so I sometimes have to default to my travel schedule but for the most part I try to keep a somewhat consistent training schedule even with my pacing jobs and travel schedule.

Matt Scherer:  That’s a tough question and probably a better question for my current coach Danny Mackey (Brooks). I only ran it once and happened to get a great time so from me it’s hearsay on what the right training methods are. But from in the past being both a 400m and 800m specialist at different times I would say it more resembles an 800m training style. You need to be able to run a fast 400m but in the style of an 800m runner. The race really begins at 400m in and is decided in the last 200m. In my one race I beat 2-time Olympian Nick Symmonds with a quick 400m (48.7) and held on for the win but truly feel like he would beat me 9 times out of 10 with his 800m strength and tactics. I just happened to catch him on the right day in 2008. Duane (coming off his American record) is the total package when it comes to 600m. He’s got 45 sec open 400m speed and 1:42 800m strength. If he put the right race together he would obliterate the outdoor world record of 1:12.81.