The last time I saw Michael Tumi of Italy run was at the 2011 Roma Golden Gala (aka Diamond League meeting).  It was the 100 meter pre-meet heats, and I was actually cheering for fellow countryman Jared Connaughton who won the event in 10.31.  Tumi finished 2nd in that race in 10.45, with his season best 10.35.

Fast forward to 2013 and we are at the Italian indoor Nationals in Ancona, the only indoor 200 meter oval in Italy. 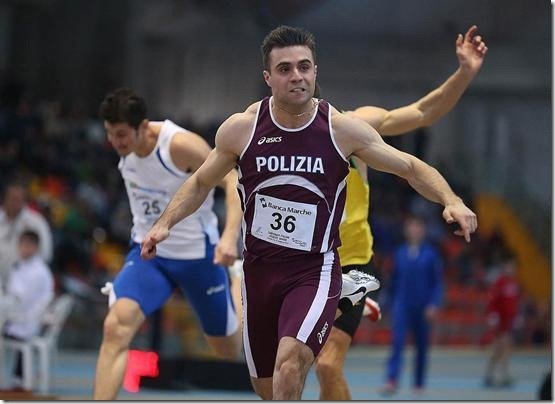 If I was a betting man, I would expect Simone Collio to win who has a PR of 6.55.  Collio is also engaged to the Bulgarian sprinter Ivet Lalova, making Athletics a very small world indeed.  Maybe too small.

And you can’t count out Fabio Cerutti who finished second to Dwain Chambers at the 2009 European Indoor Championships in Turin in a time of 6.56.

In the 60 meter finals, Tumi’s start and first 10 are average for an elite 100m sprinter. But take a look at his drive phase after 10 meters.  (Collio is to his left, Cerutti to his right)  He pulls away from the rest of field with ease, staying super relaxed and just focusing on getting the job done.

At the time of this writing, the only man in the world faster is Darvis Patton after his 6.50 at the Millrose Games in New York last Saturday.

This race reminded me of Ben Johnson’s famous 1986 Zurich race where he runs a 0.81 sec 10m segment from 60-70m into a 1.3mps headwind in a stacked world class field. (The YouTube video is here)

Here is the video on Dailymotion: