Please remember, this is a transcript, and it was never meant to be an article, so the grammar isn’t perfect.

The continues the topic of Neuromuscular Development, with a focus on the sprint events. 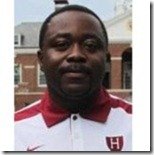 Kebba Tolbert is the Associate Coach at Harvard University, specializing in Sprints, Hurdles, and Horizontal Jumps.  He has 2 DVDs produced by Coaches Choice.

Moreover, I interviewed Kebba back in 2012 as part of the Freelap Friday Five series. 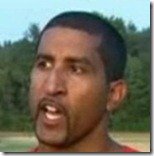 Latif Thomas is a former All East Sprinter while attending the University of Connecticut on a track and field scholarship. Latif is USA Track & Field Level II Certified in the Sprints, Hurdles and Relays.

He is the co-founder of CompleteTrackandField.com and produced the 11 DVD set on Complete Speed Training for sprinters.

NOTE: This was recorded January 2011.

[Latif Thomas]:  Can you give us some specific examples of the type of movements that are the most universal or some of the important areas to consider in regards to addressing some of these issues or common injury chains or problem areas that coaches can put in their minds to look for tomorrow at practice?

So if those or the cuboid stuck, then you get ankle issues and foot issues and that can shoot up. When those get locked up and you get back pain, hip pain. So those areas right there can be a problem. The shin splint area or the shin splint issue that everyone goes through at some point in their career and sometimes you have years where you feel like your whole group has it. Looking at the peroneals, the peroneal muscles.

So those muscles sometimes get gummed up where they get really tight and when those get really tight that’s when you have the shin splints. So teaching the athletes how to do massage with ice cups or use a tennis ball, sometimes even a golf ball, using a foam roller or a stick can help to relieve tension in the fascia, help to unbound those areas in the whole lower leg complex.

Sometimes you have to get in and do manual therapy on the peroneals and surprisingly a lot of that stuff sometimes is also related to nutrition. So with the peroneals and you have shin splints, you ask the kid how many fruits and vegetables did you eat today? The answer is well, I had a tomato on my burger or I had some ketchup. That doesn’t count. I had some lettuce on whatever and that’s not it.

So getting the right amount of fruits and vegetables, getting the antioxidants in the body helps the healing process and helps things to glide correctly. You ask them how many cups of water did you drink today, how much water? Well I had some water when I had lunch, one cup or I passed the water fountain and had some water. You gotta tell them that you need about a gallon of water a day.

What I found is kids that have shin splints issues, when they eat more fruits and vegetables, when they get Omega-3 fatty acids in their diet, when they drink a decent amount of water some of that stuff starts to fix itself because the body’s healing, the body’s in a nutritionally non-deficient state.

Looking at the tibialis anterior. That’s an area when you have shin splint issues that’s tended to be inflamed or it tends to get cinched down. So working that area as well can make a big difference.

So what we also look at in the lower leg foot complex is we look at the ankle joint. How much flexion versus extension do you have, one side versus the other, more healthy versus unhealthy, looking at the supination and pronation of the foot, looking at those types of things. How much dorsiflexion do we have? When we’re doing our sprint drills or our sprint awareness exercises, is it in the right sequence; those types of things. So we evaluate those things in the lower leg to look at the health and the ability of the athlete to do speed power work. So if you have a lot of lower leg issues, the ability to sprint and be fast and do lots of volume of work is going to be very limited.

So it’s not a matter of the kid being lazy or not trying or not running fast enough. It’s a matter of they’re not physically in a state where they’re ready to do true speed and power or true sprinting. So you might have to go a plan B or get them to the medical people or have them do some homework at home, whether it’s the foam roller or the tennis ball or a combination of those things, which is probably best.

That’s one example of looking at some of the lower leg and that’s a real surface evaluation or real surface overview of some of the issues that can go on on the lower leg, but something to understand because the foot’s where you make contact with the ground. That’s where all the force is applied. So if that lower leg is giving you issues, then it’s gonna be very hard to sprint, hurdle and jump.

[LT]: That makes a lot of sense. So would you consider this to something that just really comes down to having a fundamental understanding of flexibility in your program design because a lot of things you’re talking about here seem like the kinds of issues that can potentially just pop up even in the best of programs or the with most knowledgeable coaches or workout planning type of person. Is it you’re just talking about having a plan B where you may have to send a kid home and have them do a foam roller or send them to the training room, et cetera?

[KT]: Yeah. I think the better your training is going the closer you are to great performance, the closer you are to injury. I think that’s –Because when you’re close to great performance you’re on the edge. Well when you’re on the edge any little thing can make things go awry. So sometimes it can happen. Not because you had bad training design. Sometimes you got great training design and you just went one day too far. You had bad luck or the kid didn’t sleep well that day, that night before. I’ve seen some crazy things happen at the worst time and it’s not necessarily the coach’s fault or really the athlete’s fault. It’s just you reached a limit or you were near the limit, but if you don’t ever get near the limit you’re not gonna have ultimate performance.

There’s a time and place for everything and yeah, you’ve gotta rest. Rest is a crucial part of performance and a crucial part of elite performance, but you can’t just rest. You’ve gotta get ready to go as well, but that’s part of the art. Anybody tell you they figured it all out, they’re lying to you. No one’s figured it all out yet. It’s an art and it’s a science and they’re both very important.

Another area that we tend to have issues with, every coach that’s coached a sprinter has kids with hamstring problems. So when they go to the training room the kids are told ice and stim and stretch. That rarely works.

Everyone gets hamstring injuries and the kids take eight weeks to come back or they’re out for the season. I’ve been fortunate enough to be involved either with good therapists or good coaches or I’ve done good research and you have good resources to rely upon in terms of people that when I’ve had some injury situations happen at inopportune times to get on the phone and call and say hey, this is what’s going on, this is what I see, this is what I feel. What do you think I should do?

When it’s not operating efficiently it creates a whole host of problems. So we need to get past the idea that okay, the hamstring’s tight so I need to work on the hamstring. A lot of times with hamstring issues, it’s not the hamstring at all that’s really the problem.

It’s the hamstring’s being overworked because the psoas might be out of whack or the piriformis or you have to do work along the iliac crest to get the hamstrings to relax because once you get those other areas to relax then the tension’s gone out of the system and everything can operate efficiently again.

See also  London Hipsters vs Me

[LT]: That’s a great point, Kebba. Can you give us maybe just one example of the type of activity or movement that you would do if you have an athlete who’s having this type of problem that you would do to address that? Even a very general example.

Sometimes you do a muscle test and some of the stuff from Thiel, like Combining Old and New : Naturopathy for the 21st Century

So there are a lot of good therapists, like Thiel and people like Leon Chaitow’s stuff (i.e. Positional Release Techniques with DVD-ROM, 3e

) is very, very influential and very helpful and the Travell and Simmons book Travell & Simons’ Myofascial Pain and Dysfunction: The Trigger Point Manual

That stuff is super because it lets you understand where to look at for dysfunction and how to maybe find the bombs that are hidden in different places and why certain things might be connected when they wouldn’t necessarily look so in an anatomy book. Does that make sense?

[LT]: No; that does make sense. It’s interesting. You have to shift your perspective a little bit or go beyond maybe what the common view on things is.