Today is International Women’s Day (IWD) around the world.  In the past, I wrote about Athletes-turned-Coach Irena Szewinska and Margot Wells as well as Athletes Wyomia Tyus and Chi Cheng. 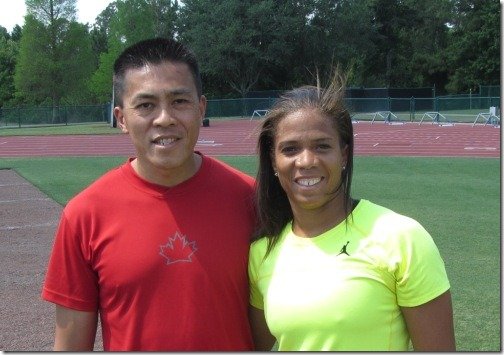 I also had a chance to meet some athletes, including April Holmes, the 100m Gold medalist at the 2008 Beijing Olympics.   She  went on to win a bronze at the London 2012 Olympics in the same event.

Visit her website at www.aprilholmes.com and please support her foundation!

Question 1: You’ve competed in 3 Olympics (2004 Athens, 2008 Beijing, 2012 London).  Can you describe the reception at London, competing in front of a sold out stadium?  How did London compare to ‘04 & ‘08 in terms of popularity, as the Paralympics is gaining more and more momentum every year?  Can you see the differences/improvements with each and every Olympiad?

April Holmes: Tickets for the 2012 Paralympic Games were so difficult to get! I think my family called me every week asking if they were going to get tickets to see me run, since they had already paid for their airline and hotel accommodations. Once I walked into the stadium, I knew why they originally had so much trouble. The crowd was so energetic and knowledgeable. I believe the London organizing committee did a magnificent job of putting their stamp own the Paralympics. There were several times they were either chanting different athletes or country names. I can surely see the growth in the Paralympics and it’s magnificent to be involved in the growth, excitement and education of the movement. 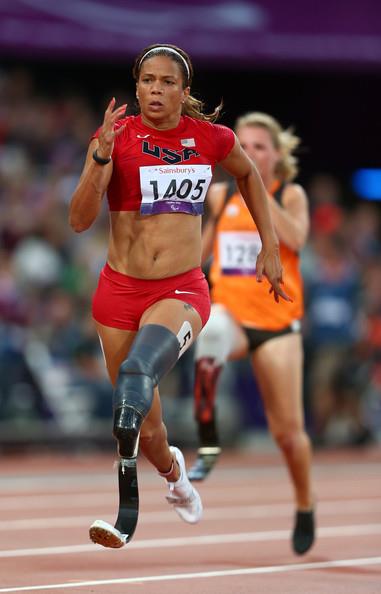 Question 2:  On Controversy… first we had the old debate of paralympians competing with the able-bodied athletes, and now in 2012, we have a blade length controversy from the men’s 200m. Can you shed some light on the actual process of obtaining a standard for prosthetic length (I assume this is only for double-amputee athletes)? Based on your body height and other measurements, what range has IPC allowed you to compete in?  What do you use (type, length, etc)?

April Holmes:  In London there was a growing controversy with the length (height) of the prosthetic legs of double-amputees. While the double-amputees were within the rules of the IPC, there were other athletes (mainly single-leg amputees), that believed the current rule was unfair. Taller athletes typically have a longer stride length. So if you can manufacture your height, then you can increase your stride length thus possibly being able to run faster. The IPC, athletes, and coaches sat down in London to discuss the issue of height in prosthetics of double-amputees and have since moved toward a revised ruling on the matter.

Question 3: Training strength vs weakness…  An able bodied athlete can accelerate much faster than a Paralympic athlete.  Take a look at Oscar Pistorius negative splits in the 400m, for example.  How different is your training compared to the other sprinters with Brooks Johnson?   Knowing this strength/weakness, are you focused more on speed endurance?  Trying to gain a better MaxV (maximal velocity)?  That being said, is there an event you are specifically training for (100-200-400-LJ)?  What do you think is your ideal event?

April Holmes:  Every athlete has their own set of strengths and weaknesses. As a professional, it is up to you to not only know what those are, but to find a training program and group to make you more successful. I train daily for the 100 & 200 meters. Depending on the time of year and day of week, my focus is different. Let’s just say I love MaxV days and don’t care much for the endurance aspect

Question 4:  What are some of the technologies that has helped you in your training?  (Freelap, Dartfish, etc)  Can you give me a sample workout with actual splits (where Freelap has helped)?  For example, what is your fly 30 time?

April Holmes:  There are so many variables that go into technology for amputees. One of the greatest training tools that I have found is Freelap. Once I learned how to use it, I was overjoyed knowing that I could be at practice by myself and still make sure I was getting a quality workout and timing accuracy. I have done everything from flying 30’s to even interval training with the Freelap system and have always been super excited by the results.

Question 5:  What do you do for weight training and plyometrics?   What are the challenges behind some of the exercises, keeping everything in sync?  As your body gets stronger and more powerful with training, do you have to adjust your blade as well?

April Holmes:  From the time I step on the track, until the moment before I step off, I have my running leg on. Initially it was difficult to do some things, then I became patient and learning how. I very rarely make adaptations to workouts, running, drills, or anything because of my prosthesis. I believe that if I am trying to match the speed and technique of Olympic athletes, then I should emulate their work. I also try not to make any drastic changes to my leg since I believe constant changes begin to mess with your psyche. When I run, I want to KNOW my left leg is going to hit the track and worry more about execution and winning.