Introduction to the Physics of Sports

You are here: Home / Book Reviews / Introduction to the Physics of Sports
287
SHARES
FacebookTwitter

If you liked the “back to school” articles on How much Horsepower does Usain Bolt Generate? and How do you determine the Worlds Fastest Man? then you’ll enjoy this Kindle book.

An Introduction to the Physics of Sports

is written by University lecturer Dr. Vassilios McInnes Spathopoulos, who presents the physical mechanisms governing a series of popular sports, including Track and Field. 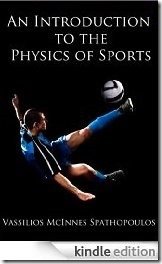 The author’s goal is twofold:

On the one hand to give a new perspective on sport, enabling fans, even those with limited scientific knowledge, to gain a better idea of exactly how athletic performances are achieved.

On the other hand, the presentation of the basic concepts of physics through sport is an attractive and popular way for the general public to assimilate these concepts:

In all the chapters, simulations, specially created for the purpose of the book, complement the theoretical concepts. The simulations are based on mathematical models of sports, one of the key research interests of the author.