The 600 meters.  For a quarter-miler, that’s two laps of sprinting and one lap of hell.

His father, Charles Jenkins, won 2 gold medals at the 1956 Olympic 400m and 4x400m.  I think this makes them the only father-son gold medal duo in Olympic Track history in the same event. (correct me if I am wrong).

[Tweet “For a Quarter-Miler, the 600m is two laps of sprinting and one lap of hell”] See also  The Attrition Rate of a 400 meter Sprinter

Chip Jenkins: In my opinion, the record took so long to break because I feel maybe in the last twenty six years there were not that many 600 meters contested. The emphasis is on outdoor running these days. Indoors is a way people who are outdoors specialists get a season to earn some money. A lot of runners aren’t in shape for indoors or don’t take it seriously. I grew up on the East coast where indoor racing is valued. I never was the kind of guy who took any races lightly indoor or out. A race was a race and I always made sure I was prepared for it. The other thing is that record was not an easy record to break either. It was very fast and people have been specifically preparing to break that record. So when the guys looked up And saw that there was an old record to break during a non Olympic year they were prepared and broke it.

Q2) Let’s talk about the race, since I was there.    You split in 47.5, Marcus Sanders was in the race, and there was the bump at the end that could have cost the WR?

Chip Jenkins:  Yes if it wasn’t for that bump with Marcus I might have run 1:15:00 or even 1:14 high obliterating the record completely. That has happened to me one time in the 500 meters where I should have run 1:00 flat. 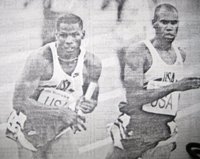 Q3) You ran in Barcelona 1992 4x400m rounds (see image on left, with Quincy Watts).  You were running in the same era as Quincy Watts, Butch Reynolds, Steve Lewis, Michael Johnson.  Having 3 Americans in any major finals was assumed.  How fierce was the competition?  Did these guys “duck” each other as we see in today’s top sprinters?

Chip Jenkins:   No we never ducked each other in the 400 meters. This is why America is so good in the 400. The 400 meters are the Marines of Track and Field. As a group, we are collectively fearless. The best of the best.

Running the 400 meters in America is nasty. You need to come ready to compete all the time or you are going to be embarrassed.

Q4) Can you give a quick sample overview of your training?  I assume it was a long-to-short over-distance type of training?  Lots of 500’s and 600s?  Short recoveries?

Q5) Your father (pictured on the left) was the 1956 400m and 4x400m Olympic champ.  I assume that was a huge influence growing up?  What advice can you give to father/son or father/daughter combos?  (I get a LOT of emails where the father is the coach, and is micro managing their child’s running career, from 9 year olds right up to high school!!!)  In our era, I can think of Calvin Smith Sr (and Jr) and Wallace Spearmon Sr (and Jr).

Chip Jenkins:  If there is any advice I would give with the father son thing. Don’t push your kid. If he enjoys it great. If he doesn’t enjoy it, he won’t be good. The son (or daughter) has to want it to excel in the sport. The kid must have the desire to be good. If there is no desire there, forget it.  It’s pointless. I wanted to be really good. My father could have won 10 gold medals. I wanted it for myself not for him or anybody else.