How to Find a Post-College Sports Agent (with Chris Layne)

You are here: Home / Coaching / How to Find a Post-College Sports Agent (with Chris Layne)
54
SHARES
FacebookTwitter

Last year, I interviewed Kris Mychasiw of Sprint Management on the ins-and-outs on finding an agent, landing your first sponsor, and getting into big meets.

Another common question I get from the mailbag is: How to find a sports agent, especially post-Collegial!

David Pickett is a graduate student in the Masters program at East Tennessee State University , studying Kinesiology and Sport Management. He is also a volunteer coach at ETSU.

David had a chance to sit down with Chris Layne where he provides insight on the steps athletes should take when pursuing a running career at the next level after college.

Q: Should an athlete select an agent for representation?

Chris Layne: Yes, but keep in mind an athlete needs to be at a particular level or project a certain skill set before an athlete rep. would be beneficial. A good agent will bridge the gap between the athlete and events, potential sponsors, and also provide a layer of support regardless of whether or not an athlete is earning income at that time. Take Ciaran O’Lionaird for example. Based on his NCAA performance alone, I’m sure he fell off the radar, but when I went back and looked at his credentials, what he did as a junior, and his performance at the ACC meet, I knew this was someone I would be interested in working with at the time, and his discipline range was a good fit for Total Sports.

Q: What should an athlete look for in searching for an agent?

Chris Layne:  I think a companies list of clients tells the story – credibility, relationships/network and experience. Find out how much turnover a company has seen in the last few years.

Q: What can the agent do for the athlete?

Chris Layne: Our primary role is to plan and orchestrate an athlete’s schedule and secure sponsorship opportunities, but on a daily basis it’s much more. For example, you might find us organizing travel, doing event entries, helping families plan trips, arranging PR, invoicing events or working on visas.

See also  Best ways to Recover from a Marathon

Q: As an agent, what do you look for when recruiting college athletes?

Chris Layne: A skill set that tells me this is someone that can breakthrough at the next level. This athlete doesn’t have to be the NCAA Champion, and there are indicators along the way I find important. If you look at both Super Bowl rosters, they aren’t filled with 5 star recruits out of high school, you’ll find plenty of 2 and 3 stars. Track and field is the same way, but as an agency, you have to be careful with your decisions.

Q: How much does indoor track and field weigh on receiving a professional contract?

[SIDENOTE: read Stuart McMillan and my thoughts on Indoor running in Do you Like Indoor Track & Field?]

Chris Layne: I don’t believe it’s as important as outdoors, but again, it can be one of the variables helping an athlete rep. decide if he/she is going to work with someone. Last season we were fortunate enough to sign Aisha Praught. Aisha didn’t have a stellar outdoor season, but her indoor performance, along with other factors, helped us decide she was someone we wanted to work with after NCAA’s.

Q: When recruiting a distance runner: do you look at their performances in cross country, the running circuit, and on the track? Or, do you focus solely on one area?

Chris Layne: We approach any event area with two things in mind. A, does the athlete have that skill-set, and B, is this individual a good fit for our company based on that event area.

Q: When recruiting an athlete, how much is based on immediate performance and long-term performance?

Chris Layne: Definitely a combination of both. Immediate performance gets your attention and then the projection of long-term performance will solidify interest.

Q: What should those athletes who didn’t receive contacts out of college do to grab an agent’s attention? 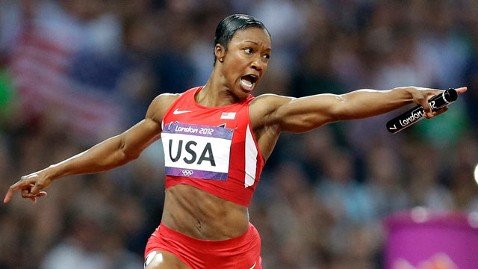 Chris Layne: Carmelita Jeter is a great example of an athlete who didn’t have representation and she worked her way up the ladder until reaching a point where management would be beneficial. Not every athlete develops at the same pace due to a number of variables (coaching, injury, etc.). Athens Olympic pole vault gold medalist Tim Mack is another example. When we made the decision to work with Tim, we weren’t overloaded with vaulters, he was just up the road at UT, and in a small way, the doors we opened gave him more chances to develop his talent in an extremely difficult technical event.

Q: What factors do shoe companies look for when choosing an athlete to represent their product?

Chris Layne: Performance and Marketability! Each shoe company has a different strategy and they’re looking for an athlete that fits both needs, especially in the market we’re seeing today. These companies have less dollars to spend so they must also get it right.

Q: How much is weighed on where the athlete is from in terms of their country they represent?

Chris Layne: There’s no doubt an athlete’s country will play a role in their marketability when it comes to a sponsorship, and for obvious reasons, but performance can overcome this issue to some degree. Sally Kipyego had a phenomenal college career, but she still had to prove she was capable of running at an international level on a consistent basis. Once she did this, her value increased.

Q: What are some of the times and marks that an athlete should achieve in order to be consider for a contract?

Chris Layne:   There was a time when a 100 meter time of 10.00 out of college was going to yield a solid contract, but now we have a gentleman by the name of Usain Bolt who has turned the event upside down and 10.00 doesn’t mean what it meant before his breakthrough. There is no doubt time plays a factor, but I also believe there are a number of other variables that need to be considered. If I had to draw a line in the sand, the top 3 athletes in many of the events at the NCAA Championships could project as solid bets for the next level of the sport, but again, that’s not always the case either.

See also  How to End on a Good Note

Q: How do you decide what shoe companies to approach when negotiating a contact for an athlete?

Chris Layne: When you asked the question about whether or not an athlete needs management, I think this a true benefit to having a good athlete rep.

A good manager knows what each company is specifically looking for, and this a pretty fluid aspect of the market and often tough for someone not in the middle of the business to understand.

Q: What should college coaches do in order to have their athletes noticed by an agents?

Chris Layne: Honestly, most of the college coaches do a good job on behalf of their athletes. We get calls all the time from coaches who might have an athlete under the radar, but I encourage this, because in this sport you never know.

Q: How should parents get involved?

Chris Layne:   I’m a parent myself, and I personally shy away from the term "agent" because I think this scares people away. I would simply want to know my daughter is asking the right questions and getting the right answers so she could make an informed decision, but at the end of the day, I would let this be her decision and my role would be to help put the right people in front of her and then let her decide on someone she feels most comfortable with as the next step is taken.

Q: What direction do you offer to athletes, if they come to your agency but don’t have the talents to receive representation?

Chris Layne: We’re not perfect, but I try to respond to as many inquiries as possible. They’ve taken the time to reach out so I think it’s important to give them a true read on what they need to do to get to the next level and always encourage them to stay in touch should they take the next step.